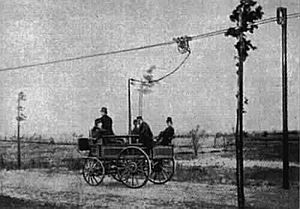 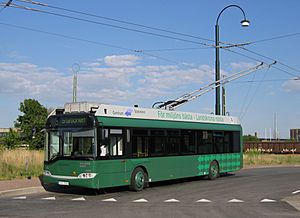 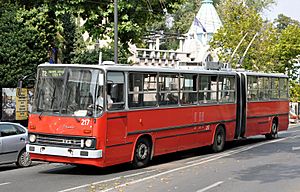 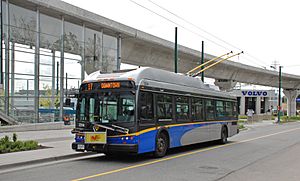 A trolleybus (also known as trolley bus, trolley coach, trackless trolley, trackless tram or simply trolley) is a bus which runs on electricity. It gets its power for the electric motors that drive the wheels from a pair of power lines above the street.

On the roof of the bus are two "trolley poles" from which electric current flows between the wires and the bus. One wire is for the positive current and the other is for the negative (return) current.

Because trolleybuses do not usually have engines which burn diesel or other fossil fuels, they are much cleaner and quieter than "normal" buses. They also do not use tracks, so they are more flexible than trams. But as these buses often cannot run without power from the wires, their range is still limited compared to ordinary buses.

Trolleybuses cost more money to make than other types of buses, so there are not many companies that build this type of bus. Some of these companies are:

All content from Kiddle encyclopedia articles (including the article images and facts) can be freely used under Attribution-ShareAlike license, unless stated otherwise. Cite this article:
Trolleybus Facts for Kids. Kiddle Encyclopedia.