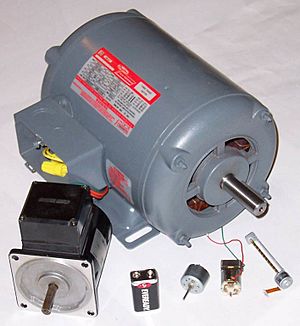 Inside an Electric Motor

Let's start by looking at the overall plan of a simple two-pole DC electric motor. A simple motor has six parts:

An electric motor is all about magnets and magnetism: A motor uses magnets to create motion. If you have ever played with magnets you know about the fundamental law of all magnets: Opposites attract and likes repel. So if you have two bar magnets with their ends marked "north" and "south," then the north end of one magnet will attract the south end of the other. On the other hand, the north end of one magnet will repel the north end of the other (and similarly, south will repel south). Inside an electric motor, these attracting and repelling forces create rotational motion.

Electric motors are boardly classified in to two different categories i.e. DC (direct current) and AC (Alternating current). With in these categories there are numerous types, each offering unique abilities that suit them well for best applications.

In 1821, Michael Faraday made the first electric motor. It worked using the force of magnetism.

He created a simple electromagnet by taking a nail and a wire, wrapping about 100 loops of wire around the nail and connected it to a battery. With this he had a simple electromagnet with north and south pole. In the middle of the nail he had made a hole and put a spindle into the hole so that the nail could rotate. He then took a horseshoe-shaped magnet and placed the wire wrapped nail in the middle.

He connected the wire of the north pole to the negative pole of the battery and the wire of the south pole to the positive pole. The basic law of magnetism told him what would happen: the north end of the electromagnet would repel the north end of the horseshoe-shaped magnet and would attract the south pole. The same happened on the other side of the nail, with the result that the nail turned.

All content from Kiddle encyclopedia articles (including the article images and facts) can be freely used under Attribution-ShareAlike license, unless stated otherwise. Cite this article:
Electric motor Facts for Kids. Kiddle Encyclopedia.