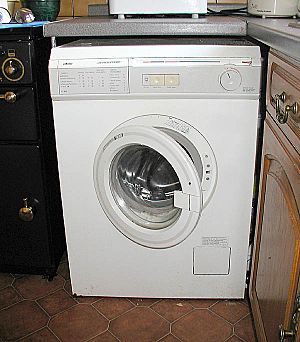 A washing machine is a machine that washes dirty clothes. It contains a barrel into which the clothes are placed. This barrel is filled with water, and then rotated very quickly to make the water remove dirt from the clothes. Most washing machines are made so that detergent (liquids or powders) can be put into the machine. These can help make the clothes cleaner.

Sometimes a washing machine and a clothes dryer are put together. Washing machines often use technology to change how you want to wash.

All content from Kiddle encyclopedia articles (including the article images and facts) can be freely used under Attribution-ShareAlike license, unless stated otherwise. Cite this article:
Washing machine Facts for Kids. Kiddle Encyclopedia.