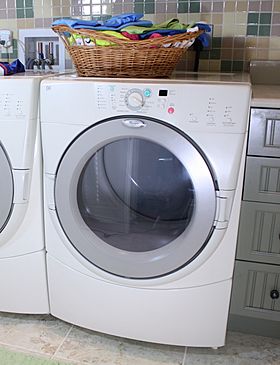 A clothes dryer, tumble dryer, drying machine or dryer is a powered household appliance that is used to remove moisture from a load of clothing, usually shortly after they are washed in a washing machine.

Many dryers consist of a rotating drum called a "tumbler" through which heated air is circulated to evaporate the moisture, while the tumbler is rotated to maintain air space between the articles. Using these machines may cause clothes to shrink or become less soft.

Tumbler dryers continuously draw in the cool, dry, ambient air around them and heat it before passing it through the tumbler. The resulting hot, humid air is usually vented outside to make room for more dry air to continue the drying process. This design makes no effort to recycle the heat put into the load, and thus is considered environmentally wasteful. Nevertheless, it is simple and reliable, and therefore has been widely used. 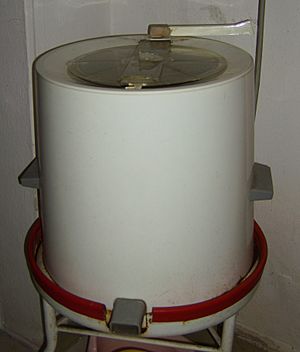 These centrifuge machines simply spin their drums much faster than a typical washer could, in order to extract additional water from the load. They may remove more water in two minutes than a heated tumbler dryer can in twenty, thus saving significant amounts of time and energy. Although spinning alone will not completely dry clothing, this additional step saves a worthwhile amount of time and energy for large laundry operations such as those of hospitals.

Just as in a normal dryer, condenser or condensation dryers pass heated air through the load. However, instead of exhausting this air, the dryer uses a heat exchanger to cool the air and condense the water vapor into either a drain pipe or a collection tank. In terms of energy use, condenser dryers typically require slightly more power than conventional dryers, typically on the order of ~15%.

A closed-cycle heat pump clothes dryer uses a heat pump to dehumidify the processing air. Such dryers typically use less than half the energy per load of a condenser dryer.

A new type of dryer in development, these machines are a more advanced version of heat pump dryers. Instead of using hot air to dry the clothing, mechanical steam compression dryers use water recovered from the clothing in the form of steam.

Dryers expose flammable materials to heat. Underwriters Laboratories recommends cleaning the lint filter after every cycle for safety and energy efficiency, provision of adequate ventilation, and cleaning of the duct at regular intervals. UL also recommends that dryers not be used for glass fiber, rubber, foam or plastic items, or any item that has had a flammable substance spilled on it. 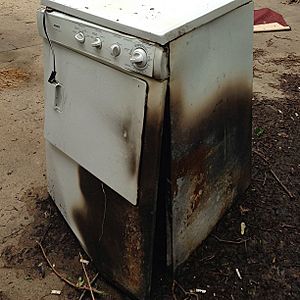 A clothes dryer that has been damaged by fire.

In the United States, the U.S. Fire Administration in a 2012 report estimated that from 2008 to 2010, fire departments responded to an estimated 2,900 clothes dryer fires in residential buildings each year across the nation.

The environmental impact of clothes dryers is especially severe in the US and Canada, where over 80% of all homes have a clothes dryer. According to the US Environmental Protection Agency, if all residential clothes dryers sold in the U.S. were energy efficient, "the utility cost savings would grow to more than $1.5 billion each year and more than 22 billion pounds of annual greenhouse gas emissions would be prevented”.

All content from Kiddle encyclopedia articles (including the article images and facts) can be freely used under Attribution-ShareAlike license, unless stated otherwise. Cite this article:
Clothes dryer Facts for Kids. Kiddle Encyclopedia.