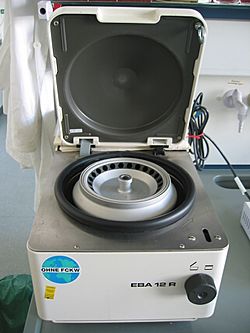 A laboratory tabletop centrifuge. The rotating unit, called the rotor, has fixed holes drilled at an angle (to the vertical), visible inside the smooth silver rim. Sample tubes are placed in these slots and the motor is spun. As the centrifugal force is in the horizontal plane and the tubes are fixed at an angle, the particles have to travel only a little distance before they hit the wall of the tube and then slide down to the bottom. These angle rotors are very popular in the lab for routine use.

A centrifuge is a piece of equipment that puts an object in rotation around a fixed axis (spins it in a circle), applying a potentially strong force perpendicular to the axis of spin (outward). The centrifuge works using the sedimentation principle, where the centripetal acceleration causes denser substances and particles to move outward in the radial direction. At the same time, objects that are less dense are displaced and move to the center. In a laboratory centrifuge that uses sample tubes, the radial acceleration causes denser particles to settle to the bottom of the tube, while low-density substances rise to the top.

There are 3 types of centrifuge designed for different applications. Industrial scale centrifuges are commonly used in manufacturing and waste processing to sediment suspended solids, or to separate immiscible liquids. An example is the cream separator found in dairies. Very high speed centrifuges and ultracentrifuges able to provide very high accelerations can separate fine particles down to the nano-scale, and molecules of different masses.

Gas centrifuges are used for isotope separation, such as to enrich nuclear fuel for fissile isotopes. 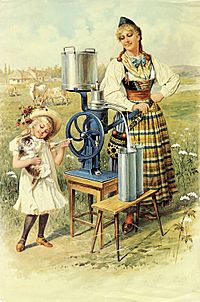 English military engineer Benjamin Robins (1707–1751) invented a whirling arm apparatus to determine drag. In 1864, Antonin Prandtl proposed the idea of a dairy centrifuge to separate cream from milk. The idea was subsequently put into practice by his brother, Alexander Prandtl, who made improvements to his brother's design, and exhibited a working butterfat extraction machine in 1875.

A centrifuge machine can be described as a machine with a rapidly rotating container that applies centrifugal force to its contents. There are multiple types of centrifuge, which can be classified by intended use or by rotor design.

All content from Kiddle encyclopedia articles (including the article images and facts) can be freely used under Attribution-ShareAlike license, unless stated otherwise. Cite this article:
Centrifuge Facts for Kids. Kiddle Encyclopedia.