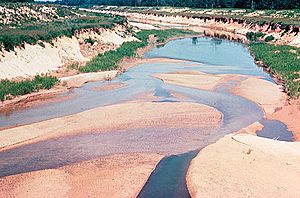 Sedimentation may pertain to objects of various sizes, ranging from large rocks in flowing water to suspensions of dust and pollen particles to cellular suspensions to solutions of single molecules such as proteins and peptides. Even small molecules supply a sufficiently strong force to produce significant sedimentation.

The term is typically used in geology to describe the deposition of sediment which results in the formation of sedimentary rock, but it is also used in various chemical and environmental fields to describe the motion of often-smaller particles and molecules. This process is also used in the biotech industry to separate cells from the culture media.

All content from Kiddle encyclopedia articles (including the article images and facts) can be freely used under Attribution-ShareAlike license, unless stated otherwise. Cite this article:
Sedimentation Facts for Kids. Kiddle Encyclopedia.