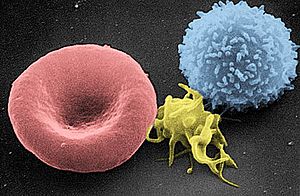 Blood is a liquid in humans and many animals except insects. Blood is pushed through the organism by the heart, and brings nutrients and oxygen to our tissues. It also takes away waste and carbon dioxide from tissues.

Blood plasma is the yellow liquid in which blood cells float. Plasma is made up of nutrients, electrolytes (salts), gases, non-protein hormones, waste, lipids, and proteins. These proteins are albumin, antibodies (also called immunoglobulins), clotting factors, and protein hormones. Plasma that does not have the protein fibrinogen is called serum and cannot clot. Adults have about 3 liters of plasma. Plasma is a liquid, mostly water (90%). Plasma takes up 55% of volume.

RBCs are filled with haemoglobin. This is a protein. It is made to carry a large amount of oxygen. Haemoglobin has iron in it. The iron and oxygen gives haemoglobin its red color. This is why blood is red. Erythropoietin promotes the creation of RBCs. Blood type antigens are carried on the surface of red cells.

RBCs also help the blood stay normal pH. The blood needs a to be at a pH of 7.4. If it is much more or less than 7.4 a person can get very sick or die. RBCs are a buffer for the blood pH. Buffer means that it stops changes in pH. The proteins and the carbon dioxide in the RBC are buffers for the blood. If you do not have enough RBCs, you will die.

Another name for white blood cell is leukocyte. Leuko means white, cyte means cell. WBC is an acronym for white blood cell. There are three main kinds of WBCs. They are lymphocytes, granulocytes and monocytes. Some of the WBCs mature into cells which do similar work in the tissues.

The different WBCs work in different ways. Some WBCs kill and eat germs and cancer cells. Some WBCs make antibodies that mark a cell so other WBCs will kill it. Some WBCs make chemicals. They release these chemicals to fight things that do not belong in the body. These chemicals cause inflammation in a part of the body. When a germ makes someone sick, the body shows it. If a bacteria gets under someone's skin and causes an infection, the skin gets red, hot, and painful. This redness, heat, and pain are signs of inflammation. This shows that WBCs are fighting the infection and killing the bacteria.

Platelets help make blood clot. A clot is when the liquid blood becomes solid. The body makes blood clot when the skin is cut. This stops blood from going out of the skin too much.

Platelets are not the only things that make clots. There are proteins in the blood that help make clots. Both platelets and clotting proteins are needed to make good clots.

Where does blood come from? 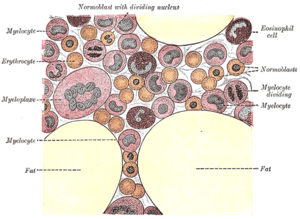 Plasma proteins are made mostly by the liver. The water and electrolytes in plasma come from the food and water that you eat.

Although blood is a fluid, in some respects it is a kind of connective tissue. Its cells originate in bone marrow and the spleen, and in the blood there are potential molecular fibres in the form of fibrinogen. These are activated when a blood clot forms.

All content from Kiddle encyclopedia articles (including the article images and facts) can be freely used under Attribution-ShareAlike license, unless stated otherwise. Cite this article:
Blood Facts for Kids. Kiddle Encyclopedia.