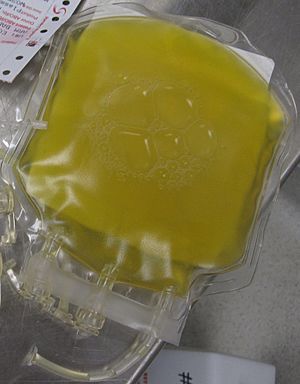 Blood plasma in a plastic bag.

Blood plasma is the yellow liquid part of blood. In normal blood, the blood cells are suspended in the plasma.

Plasma makes up about 55% of the total blood volume. It is mostly water (90% by volume) and contains dissolved proteins, glucose, clotting factors, mineral ions, hormones and carbon dioxide. Plasma is the transport medium for excretion.

In hospitals, blood plasma is prepared like this. An anti-coagulant stops the blood clotting. Then tubes of blood are spun very fast in a centrifuge. The blood cells go to the bottom of the tubes. The plasma is poured into another container.

Hospitals may give patients:

Plasmapheresis is a medical therapy which involves taking out blood plasma, treating it, and putting it back in the patient.

Whole plasma may be stored frozen, or it may be stored dry. Dried plasma can be flown anywhere in the world, and is vital for the armed forces. The method was invented in the USA in 1940, and used widely in World War II. The Army/Navy standard pack was two tin cans, each with 400cc bottles inside. One held the plasma, the other distilled (pure) water. The plasma could be restored in three minutes, and remained fresh for about four hours.

All content from Kiddle encyclopedia articles (including the article images and facts) can be freely used under Attribution-ShareAlike license, unless stated otherwise. Cite this article:
Blood plasma Facts for Kids. Kiddle Encyclopedia.