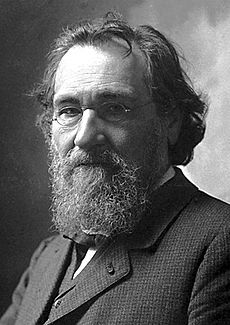 Ilya Mechnikov, one of the founders of immunology 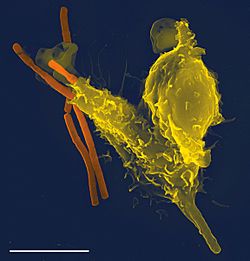 A scanning electron microscope photo of a single neutrophil (in yellow), engulfing some anthrax bacteria (in orange).

The immune system is the set of tissues which work together to resist infections. The immune mechanisms help an organism identify a pathogen, and neutralize its threat.

Once a foreign cell or protein is detected, the immune system creates antibodies to fight the intruders, and sends special cells ('phagocytes') to eat them up. 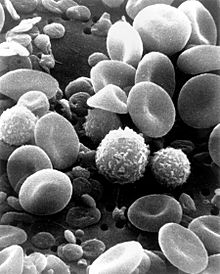 Even simple unicellular organisms such as bacteria possess enzyme systems that protect against viral infections. Other basic immune mechanisms appeared in ancient life forms and remain in their modern descendants, such as plants and insects. These mechanisms include antimicrobial peptides (called defensins), phagocytosis, and the complement system. These are the innate immune system, which defends the host from infections in a non-specific way. The simplest innate system is the cell wall or barrier on the outside to stop intruders getting in. For example, skin stops most outside bacteria getting in.

The adaptive immune response gives the vertebrate immune system the ability to recognize and remember specific pathogens. The system mounts stronger attacks each time the pathogen is encountered. It is adaptive, because the body's immune system prepares itself for future challenges.

The typical vertebrate immune system consists of many types of proteins, cells, organs, and tissues that interact in a complex and ever-changing network. This acquired immunity creates a kind of "immunological memory".

The process of acquired immunity is the basis of vaccination. Primary response can take 2 days to 2 weeks to develop. After the body gains immunity towards a certain pathogen, if infection by that pathogen occurs again, the immune response is called the secondary response.

In some organisms, the immune system has its own problems within itself, called disorders. These result in other diseases, including autoimmune diseases, inflammatory diseases and possibly even cancer. Immunodeficiency diseases occur when the immune system is less active than normal. Immunodeficiency can either be the result of a genetic (inherited) disease, or an infection, such as the acquired immune deficiency syndrome (AIDS), that is caused by the retrovirus HIV, or other causes.

Immunology is the study of all aspects of the immune system. It is very important to health and diseases.

Immunology is scientific part of medicine that studies the causes of immunity to disease. For many centuries people have noticed that those who recover from some infectious diseases do not get that illness a second time.

In the 18th century, Pierre Louis Maupertuis made experiments with scorpion venom and saw that certain dogs and mice were immune to this venom. This and other observations of acquired immunity led to Louis Pasteur (1822–1895) developing vaccination and the germ theory of disease. Pasteur's theory was in direct opposition to contemporary theories of disease, such as the miasma theory. It was not until the proofs Robert Koch (1843–1910) published in 1891 (for which he was awarded a Nobel Prize in 1905) that microorganisms were confirmed as the cause of infectious disease. Viruses were confirmed as human pathogens in 1901, when the yellow fever virus was discovered by Walter Reed (1851–1902).

Immunology made a great advance towards the end of the 19th century, through rapid developments, in the study of humoral immunity and cellular immunity. Particularly important was the work of Paul Ehrlich (1854–1915), who proposed the side-chain theory to explain the specificity of the antigen-antibody reaction. The Nobel Prize for 1908 was jointly awarded to Ehrlich and the founder of cellular immunology, Ilya Mechnikov (1845–1916).

The immune system is extremely ancient, and may go back to single-celled eukaryotes which needed to distinguish between what was food and what was part of themselves.

All content from Kiddle encyclopedia articles (including the article images and facts) can be freely used under Attribution-ShareAlike license, unless stated otherwise. Cite this article:
Immune system Facts for Kids. Kiddle Encyclopedia.