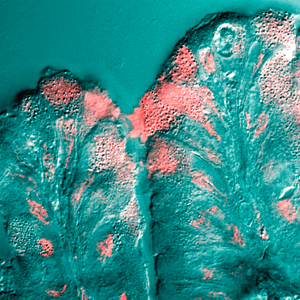 Mucus (mucous), or slime, is a slippery liquid. It is made by many living things as a kind of biological lubricant. It plays the role in living things which oil plays in machines.

Mucus is mainly composed of polysaccharides, which are long-chain carbohydrates. These molecules are stiff when dry, and sticky and slippery when wet. They are present in all types of organisms from bacteria to man.

In vertebrates mucus is made by mucous membranes. Mucus may have antiseptic enzymes (such as lysozymes) and immunoglobulins (antigens). A major function of this mucus is to protect against infection by fungi, bacteria and viruses.

Mucus protects epithelial cells in the lungs, gut, genital, visual, and auditory systems in mammals; the epidermis in amphibians; and the gills in fish. Snails, slugs, hagfish, and certain invertebrates also produce external mucus. As well as a protective function, slime helps movement and plays a role in communication.

Mucus is produced in many parts of the body. All the alimentary canal, nose, and sexual organs have mucus glands which pass the mucus to the surfaces. The surfaces are mostly internal surfaces, though in some animals mucus covers the outside of the animal. Slugs are an example of this. Mucus glands are exocrine glands, so they pass their mucus to the surface along ducts.

In the human digestive system, mucus is used as a lubricant for materials that must pass over membranes, such as food passing down the oesophagus.

A layer of mucus along the inner walls of the stomach is vital to protect the cell linings from the highly acidic environment inside the stomach. Mucus is not digested in the intestinal tract.

Alkaline mucus is also found in other places, such as eyes, saliva and cervix.

All content from Kiddle encyclopedia articles (including the article images and facts) can be freely used under Attribution-ShareAlike license, unless stated otherwise. Cite this article:
Mucus Facts for Kids. Kiddle Encyclopedia.