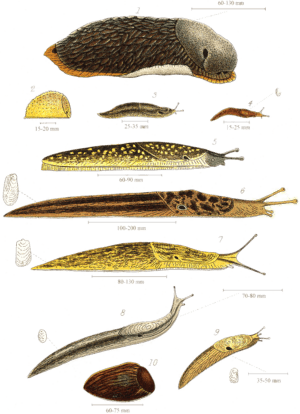 Slug is a general term for a gastropod mollusc which has no shell, or just a small internal shell.

Slugs belong to several different families which also include snails with shells. Snails are gastropods with a coiled shell large enough for the animal to pull back inside. The families of land slugs are not very closely related, despite looking similar. The shell-less slug type is an example of convergent evolution, and so the category "slug" is not a taxonomic category.

The name "slug" is used for air-breathing land slugs, while the marine forms are usually known as sea slugs. Land gastropods with a shell that is too small to hide the body are sometimes called semislugs.

The external anatomy of a slug

The external anatomy of a slug includes the following:

Tentacles Like other pulmonate land gastropods, the majority of land slugs have two pairs of 'feelers' or tentacles on their head. The upper pair is light sensing and has eyespots at the ends, while the lower pair provides the sense of smell. Both pairs are retractable.

Mantle On top of the slug, behind the head, is the saddle-shaped mantle, and under this are the genital opening and anus. On one side (almost always the right hand side) of the mantle is a respiratory opening, which is easy to see when open, but difficult to see when closed. This opening is known as the pneumostome.

Tail The part of a slug behind the mantle is called the 'tail'.

Keel Some species of slugs, for example Tandonia budapestensis, have a prominent ridge running over their back along the middle of the tail (sometimes along the whole tail, sometimes only the final part). This ridge is called a 'keel'.

Foot The bottom side of a slug, which is flat, is called the 'foot'. Like almost all gastropods, a slug moves by rhythmic waves of muscular contraction on the underside of its foot. It simultaneously secretes a layer of mucus that it travels on, which helps prevent damage to the foot tissues. Around the edge of the foot in some slugs is a structure called the 'foot fringe'.

Vestigial shell Most slugs retain a remnant of their shell, which is usually internalized. This organ generally serves as storage for calcium salts, often in conjunction with the digestive glands. An internal shell is present in the Limacidae and Parmacellidae. Adult Philomycidae, Onchidiidae and Veronicellidae lack shells. 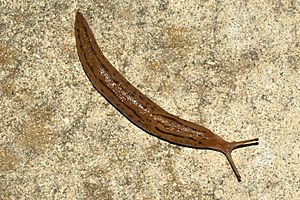 Slugs' bodies are made up mostly of water and, without a full-sized shell, their soft tissues are prone to desiccation. They must generate protective mucus to survive. Many species are most active just after rain because of the moist ground. In drier conditions, they hide in damp places such as under tree bark, fallen logs, rocks and man-made structures, such as planters, to help retain body moisture. Like all other gastropods, they undergo torsion (a 180° twisting of the internal organs) during development. Internally, slug anatomy clearly shows the effects of this rotation—but externally, the bodies of slugs appear more or less symmetrical, except for the positioning of the pneumostome, which is on one side of the animal, normally the right-hand side.

Slugs produce two types of mucus: one is thin and watery, and the other thick and sticky. Both kinds are hygroscopic. The thin mucus spreads from the foot's centre to its edges, whereas the thick mucus spreads from front to back. Slugs also produce thick mucus that coats the whole body of the animal. The mucus secreted by the foot contains fibres that help prevent the slug from slipping down vertical surfaces. The "slime trail" a slug leaves behind has some secondary effects: other slugs coming across a slime trail can recognise the slime trail as produced by one of the same species, which is useful in finding a mate. Following a slime trail is also part of the hunting behaviour of some carnivorous slugs. Body mucus provides some protection against predators, as it can make the slug hard to pick up and hold by a bird's beak, for example, and the mucus itself can be distasteful. Some species of slug, such as Limax maximus, secrete slime cords to suspend a pair during copulation. 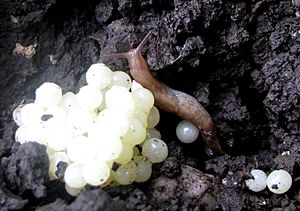 Deroceras juvenile with eggs of another (larger) slug species, most likely Arionidae 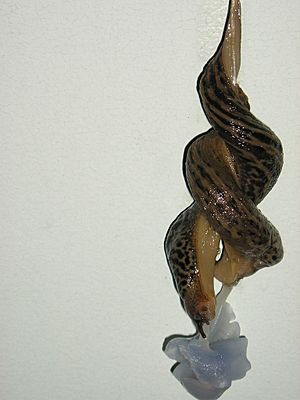 Slugs, suspended by mucous thread and pad on wall.

Slugs are hermaphrodites, having both female and male reproductive organs. Once a slug has located a mate, they encircle each other and sperm is exchanged through their protruded genitalia. A few days later, the slugs lay approximately thirty eggs in a hole in the ground, or beneath the cover of an object such as a fallen log.

Apophallation has been reported only in some species of banana slug (Ariolimax) and one species of Deroceras. In the banana slugs, the penis sometimes becomes trapped inside the body of the partner. Apophallation allows the slugs to separate themselves by one or both of the slugs chewing off the other's or its own penis. Once the penis has been discarded, banana slugs are still able to mate using only the female parts of the reproductive system.

Slugs play an important role in the ecosystem by eating decaying plant material and fungi. Most carnivorous slugs on occasion also eat dead specimens of their own kind.

Most species of slugs are generalists, feeding on a broad spectrum of organic materials, including leaves from living plants, lichens, mushrooms, and even carrion. Some slugs are predators and eat other slugs and snails, or earthworms. 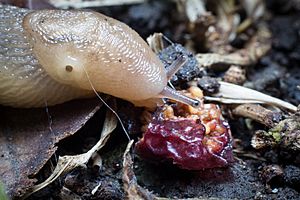 Lehmannia feeding on a small fruit in Mexico City

Slugs can feed on a wide variety of vegetables and herbs, including flowers such as petunias, chrysanthemums, daisies, lobelia, lilies, daffodils, narcissus, gentians, primroses, tuberous begonias, hollyhocks, irises, and fruits such as strawberries. They also feed on carrots, peas, apples, and cabbage that are offered as a sole food source.

Slugs from different families are fungivores. It is the case in the Philomycidae (e. g. Philomycus carolinianus and Phylomicus flexuolaris) and Ariolimacidae (Ariolimax californianus), which respectively feed on slime molds (myxomycetes) and mushrooms (basidiomycetes). Species of mushroom producing fungi used as food source by slugs include milk-caps, Lactarius spp., the oyster mushroom, Pleurotus ostreatus and the penny bun, Boletus edulis. Other species pertaining to different genera, such as Agaricus, Pleurocybella and Russula, are also eaten by slugs. Slime molds used as food source by slugs include Stemonitis axifera and Symphytocarpus flaccidus. Some slugs are selective towards certain parts or developmental stages of the fungi they eat, though this is very variable. Depending on the species and other factors, slugs eat only fungi at specific stages of development. Moreover, in other cases, whole mushrooms can be eaten, without any selection or bias towards ontogenetic stages.

Slugs are preyed upon by myriad vertebrates and invertebrates. The predation of slugs has been the subject of studies for at least a century. Because some species of slugs are considered agricultural pests, research investments have been made to comprehend and investigate potential predators. This is a necessary knowledge to establish biological control strategies.

All content from Kiddle encyclopedia articles (including the article images and facts) can be freely used under Attribution-ShareAlike license, unless stated otherwise. Cite this article:
Slug Facts for Kids. Kiddle Encyclopedia.