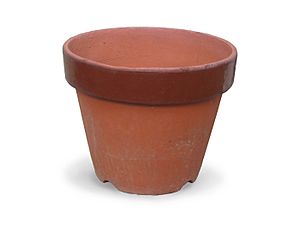 A flowerpot, flower pot, or plant pot is a container in which flowers and other plants are cultivated and displayed. Historically, and still to a significant extent today, they are made from terracotta. Flowerpots are now often also made from plastic, wood, stone, or sometimes biodegradable material. An example of biodegradable pots are ones made of heavy brown paper, cardboard, or peat moss in which young plants for transplanting are grown.

For seedling starting in commercial greenhouses or polytunnels, pots usually take the form of trays with cells, each cell acting as one small pot. These trays are often called flats.

There are often holes in the bottom of pots, to allow excess water to flow out, sometimes to a saucer that is placed under the flowerpot. The plant can use this water with its roots, as needed. Recently, some flowerpots have been made with an automatic watering system, using a reservoir. 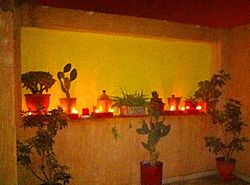 A row of flowerpots on a balcony

Flowerpots have a number of uses such as transporting plants to new locations, starting seeds, patio and indoor cultivation of plants, and the growing of tender plants in colder regions indoors. Through the centuries, the use of flowerpots has influenced the horticultural use of plants, and the Egyptians were among the first to use pots to move plants from one location to another. The Romans brought potted plants inside during cold weather. In the 18th century, pots were used to ship breadfruit seedlings from Tahiti to the West Indies. Also Orchids, African violets and Pelargonium geraniums were shipped in pots from other parts of the world, including Africa, to North America and Europe.

In the 18th century, Josiah Wedgwood's flowerpots were as popular as his famous dinner-ware, they were often highly decorative and used as table centrepieces.

In Athens, earthenware flowerpots were thrown into the sea during the festival of the Gardens of Adonis. Theophrastus, c. 371 – c. 287 BC, mentions that a plant called southern-wood was raised and propagated in pots because it was difficult to grow.

The top of the flowerpot underneath the rim is commonly known as the shoulder or collar and can aid handling.

All content from Kiddle encyclopedia articles (including the article images and facts) can be freely used under Attribution-ShareAlike license, unless stated otherwise. Cite this article:
Flower pot Facts for Kids. Kiddle Encyclopedia.