Theophrastus (Greek: Θεόφραστος; c. 371 – c. 287 BC), a Greek native of Eresos in Lesbos, was the successor to Aristotle in the Peripatetic school.

He came to Athens at a young age and studied in Plato's school. After Plato's death, he attached himself to Aristotle. Aristotle bequeathed to Theophrastus his writings and designated him as his successor at the Lyceum.

Theophrastus led the Peripatetic school for thirty-six years, during which time the school flourished greatly. He is often considered the "father of botany" for his works on plants. After his death, the Athenians honoured him with a public funeral. His successor as head of the school was Strato of Lampsacus. 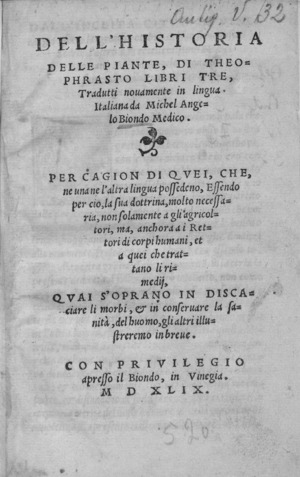 All content from Kiddle encyclopedia articles (including the article images and facts) can be freely used under Attribution-ShareAlike license, unless stated otherwise. Cite this article:
Theophrastus Facts for Kids. Kiddle Encyclopedia.