Ochre or Ocher is a golden-yellow or light yellowish brown colour. The word is from the Greek ochros, meaning "yellow". Ochre is natural earth pigment containing hydrated iron oxide.

Historical use in art and culture 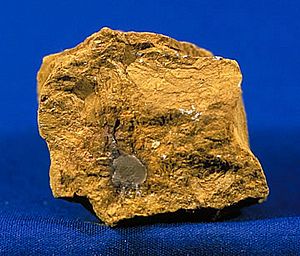 Limonite, a mineraloid containing iron hydroxide, is the main ingredient of all the ochre pigments. 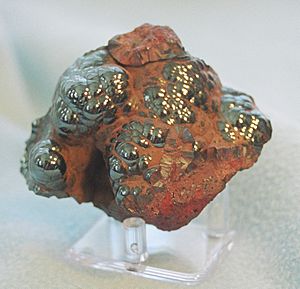 Hematite is a more reddish variety of iron oxide, and is the main ingredient of red ochre. When limonite is roasted, it turns partially to the more reddish hematite and becomes red ochre or burnt sienna. 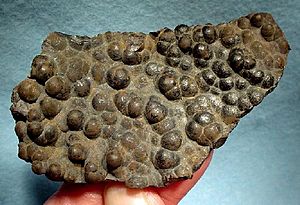 Goethite, named for the German poet Goethe, is the main ingredient of brown ochre. This sample comes from the Leadville District in Colorado. 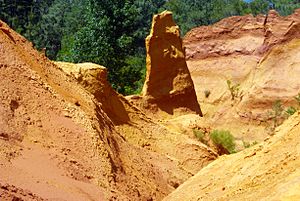 The clay hills of Roussillon, Vaucluse, in Provence have been an important source of ochre pigment since the 18th century.

Iron oxide is one of the most common minerals found on earth, and there is much evidence that yellow and red ochre pigment was used in prehistoric and ancient times by many different civilizations on different continents. Pieces of ochre engraved with abstract designs have been found at the site of the Blombos Cave in South Africa, dated to around 75,000 years ago.

The practice of ochre painting was prevalent in ancient Australia. Pleistocene burials with red ochre date as early as 40,000 BP and ochre played a role in expressing symbolic ideologies of the earliest arrivals to the continent.

In Wales, the paleolithic burial called the Red Lady of Paviland from its coating of red ochre has been dated to around 33,000 years before present. Paintings of animals made with red and yellow ochre pigments have been found in paleolithic sites at Pech Merle in France (ca. 25,000 years old), and the cave of Altamira in Spain (ca. 16,500–15,000 BC). The cave of Lascaux has an image of a horse coloured with yellow ochre estimated to be 17,300 years old.

According to some scholars, Neolithic burials used red ochre pigments symbolically, either to represent a return to the earth or possibly as a form of ritual rebirth, in which the colour symbolises blood and the Great Goddess.

In Ancient Egypt, yellow was associated with gold, which was considered to be eternal and indestructible. The skin and bones of the gods were believed to be made of gold. The Egyptians used yellow ochre extensively in tomb painting, though occasionally they used orpiment, which made a brilliant colour, but was highly toxic, since it was made with arsenic. In tomb paintings, men were always shown with brown faces, women with yellow ochre or gold faces.

Red ochre in Ancient Egypt was used as a rouge, or lip gloss for women. Ochre-coloured lines were also discovered on the Unfinished Obelisk at the northern region of the Aswan Stone Quarry, marking work sites. Ochre clays were also used medicinally in Ancient Egypt: such use is described in the Ebers Papyrus from Egypt, dating to about 1550 BC.

Ochre was the most commonly used pigment for painting walls in the ancient Mediterranean world. In Ancient Greece, red ochre was called μίλτος, míltos (hence Miltiades, red-haired or ruddy). In Athens when Assembly was called, a contingent of public slaves would sweep the open space of the Agora with ropes dipped in miltos: those citizens that loitered there instead of moving to the Assembly area would risk having their clothes stained with the paint. This prevented them from wearing these clothes in public again, as failure to attend the Assembly incurred a fine. It was also known as "raddle", "reddle" or "ruddle" and was used to mark sheep and can also be used as a waxy waterproof coating on structures. The reddle was sold as a ready-made mixture to farmers and herders by travelling workers called reddlemen. A reddleman named Diggory Venn was prominently described in Thomas Hardy's 1878 novel entitled The Return of the Native.

In classical antiquity, the finest red ochre came from a Greek colony on the Black Sea where the modern city of Sinop in Turkey is located. It was carefully regulated, expensive and marked by a special seal, and this colour was called sealed Sinope. Later the Latin and Italian name sinopia was given to wide range of dark red ochre pigments. The Romans used yellow ochre in their paintings to represent gold and skin tones, and as a background colour. It is found frequently in the murals of Pompeii.

The Ancient Picts were said to paint themselves "Iron Red" according to the Gothic historian Jordanes. Frequent references in Irish myth to "red men" (Gaelic: Fer Dearg) make it likely that such a practice was common to the Celts of the British Isles, bog iron being particularly abundant in the midlands of Ireland. 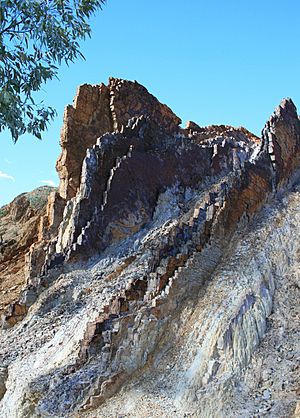 Ochre has been used for millennia by Aboriginal Australians for body decoration, sun protection, mortuary practices, cave painting, bark painting and other artwork, and the preservation of animal skins, among other uses. At Lake Mungo, in Western New South Wales, burial sites have been excavated and burial materials, including ochre-painted bones, have been dated to the arrival of people in Australia; "Mungo Man" (LM3) was buried sprinkled with red ochre at dates confidently estimated as at least 30,000 years B.P. and possibly as old as 60,000 years old. Ochre pigments are plentiful across Australia, especially the Western Desert, Kimberley and Arnhem Land regions, and occur in many archaeological sites. The National Museum of Australia has a large collection of samples of ochre from many sites across Australia.

The Māori people of New Zealand were found to be making extensive use of mineral ochre mixed with fish oil. Ochre was the predominant colouring agent used by Maori, and was used to paint their large waka taua (war canoe). Ochre prevented the drying out of the wood in canoes and the carvings of meeting houses; later missionaries estimated that it would last for 30 years. It was also roughly smeared over the face, especially by women, to keep off insects. Solid chunks of ochre were ground on a flat but rough surfaced rock to produce the powder.

In Newfoundland its use is most often associated with the Beothuk, whose use of red ochre led them to be referred to as "Red Indians" by the first Europeans to Newfoundland. It was also used by the Maritime Archaic as evidenced by its discovery in the graves of over 100 individuals during an archaeological excavation at Port au Choix. Its use was widespread at times in the Eastern Woodlands cultural area of Canada and the US; the Red Ocher people complex refers to a specific archaeological period in the Woodlands ca. 1000-400 BC. California Native Americans such as the Tongva and Chumash were also known to use red ochre as body paint.

In Newfoundland, red ochre was the pigment of choice for use in vernacular outbuildings and work buildings associated with the cod fishery. Deposits of ochre are found throughout Newfoundland, notably near Fortune Harbour and at Ochre Pit Cove. While earliest settlers may have used locally collected ochre, people were later able to purchase pre-ground ochre through local merchants, largely imported from England.

The dry ingredient, ochre, was mixed with some type of liquid raw material to create a rough paint. The liquid material was usually seal oil or cod liver oil in Newfoundland and Labrador, while Scandinavian recipes sometimes called for linseed oil. Red ochre paint was sometimes prepared months in advance and allowed to sit, and the smell of ochre paint being prepared is still remembered by many today.

Variations in local recipes, shades of ore, and type of oil used resulted in regional variations in colour. Because of this, it is difficult to pinpoint an exact shade or hue of red that would be considered the traditional "fishing stage red". Oral tradition in the Bonavista Bay area maintains that seal oil mixed with the ochre gave the sails a purer red colour, while cod liver oil would give a "foxy" colour, browner in hue. 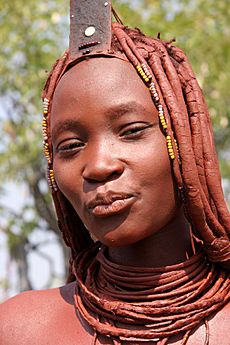 Red ochre has been used as a colouring agent in Africa for over 200,000 years. Women of the Himba ethnic group in Namibia use a mix of ochre and animal fat for body decoration, to achieve a reddish skin colour. The ochre mixture is also applied to their hair after braiding. Men and women of the Maasai people in Kenya and Tanzania have also used ochre in the same way.

During the Renaissance, yellow and red ochre pigments were widely used in painting panels and frescoes. The colours vary greatly from region to region, depending upon whether the local clay was richer in yellowish limonite or reddish hematite. The red earth from Pozzuoli near Naples was a salmon pink, while the pigment from Tuscany contained manganese, making it a darker reddish brown called terra di siena, or sienna earth.

The 15th-century painter Cennino Cennini described the uses of ochre pigments in his famous treatise on painting.

All content from Kiddle encyclopedia articles (including the article images and facts) can be freely used under Attribution-ShareAlike license, unless stated otherwise. Cite this article:
Ochre Facts for Kids. Kiddle Encyclopedia.