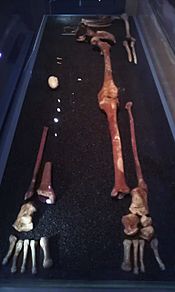 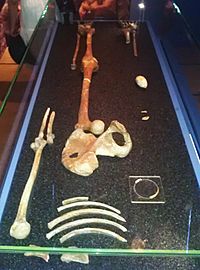 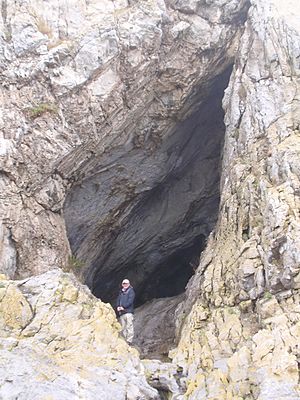 Entrance of the Paviland Cave (also called Goat's hole), where the skeleton was found.

Red Lady of Paviland is the name of an almost complete skeleton, which was found in a cave about 20 miles (32 km) from Swansea, in 1823. It was the first time, there was a scientific publication on the find of an anatomically modern man. The skeleton turned out to be 33.000 years old, and was probably among the first people on the British Isles.

The skeleton was painted with red ochre. As pearls and ivory was found nearby, the skeleton was first thought to be that of a woman. William Buckland who found it, thought that it must have been that of a witch during the Roman Era Britain. In 1968, radiocarbo dating was done, and the skeleton was found to be about 22.000 years old. The man had been bout 21, at the time of his death. The age of 22.000 years was problematic though: it meant that the British Isles would have been settled during a time when it was very cold. Another dating was done in 1989; it found an age of 33.000 years. Another dating, done in 2008, gave an age of 33.000 years. 33.000 years ago, there was one of the warmer periods of the ice age.

Today , the skeleton is kept at the Oxford Museum of Natural History.

All content from Kiddle encyclopedia articles (including the article images and facts) can be freely used under Attribution-ShareAlike license, unless stated otherwise. Cite this article:
Red Lady of Paviland Facts for Kids. Kiddle Encyclopedia.