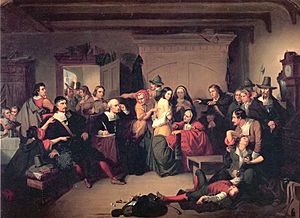 This painting by Thompkins H. Matteson is called Examination of a Witch 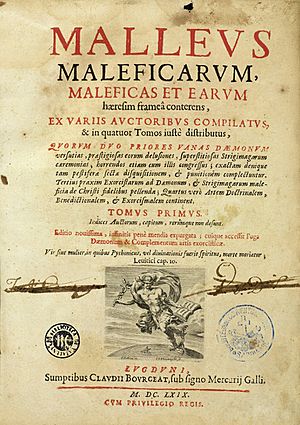 title page of the Malleus Maleficarum

A witch is a woman who practices witchcraft. Traditionally, the word was used to accuse someone of bewitching someone, or casting a spell on them to gain control over them by magic. It is now also used by some to refer to those who practice various contemporary religions such as Wiccan.

All content from Kiddle encyclopedia articles (including the article images and facts) can be freely used under Attribution-ShareAlike license, unless stated otherwise. Cite this article:
Witch Facts for Kids. Kiddle Encyclopedia.