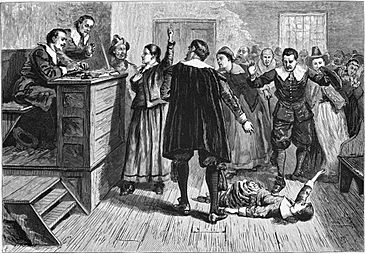 Witchcraft at Salem Village. The main figure in this 1876 illustration of the courtroom is usually identified as Mary Walcott.

A physician had said that witches have invaded Salem Village. Young girls, Betty Parris and Abigail Williams, blamed people they didn’t like and thought were suspicious devil worshippers. Betty and Abigail began to twist themselves into weird looking shapes and saying words that made no sense. The father of Betty called the doctor and the doctor gave a diagnosis and that they had been bewitched.

During the Trials, over 150 people were arrested and put in jail after being accused of practicing witchcraft. Even more people were accused, but were never formally charged by the authorities. Twenty-nine people were convicted (or found guilty) of witchcraft, which was a capital felony. Nineteen of these people - fourteen women and five men - were hanged on Gallows Hill Giles Corey, a man who refused to enter a plea, was crushed to death under heavy stones to try to force him to confess or plead. At least five more of the accused died in prison.

The trials were held in Salem, though people from all surrounding areas were brought to Salem to be tried for witchcraft. The best-known trials were held by the Court of Oyer and Terminer in 1692 in Salem Town. All twenty-six people who went to trial before this court were convicted. There were also four sessions of the Superior Court of Judicature in 1693, held in Salem , Massachusetts. Thirty-one accused witches were tried in these courts, but only three were convicted.

A much later Ipswich Witch Trial was held in 1878, and called the second Salem witch trial.

All content from Kiddle encyclopedia articles (including the article images and facts) can be freely used under Attribution-ShareAlike license, unless stated otherwise. Cite this article:
Salem Witch Trials Facts for Kids. Kiddle Encyclopedia.