It has two county seats: Salem and Lawrence. Prior to the dissolution of the county government in 1999, Salem had jurisdiction over the Southern Essex District and Lawrence had jurisdiction over the Northern Essex District, but currently these cities do not function as seats of government. However, the county and the districts remain as administrative regions recognized by various governmental agencies, which gathered vital statistics or disposed of judicial case loads under these geographic subdivisions, and are required to keep the records based on them. The county has been designated the Essex National Heritage Area by the National Park Service. 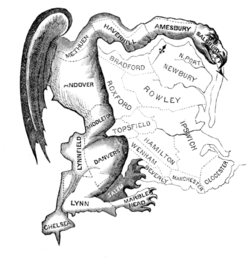 Printed in 1812, this political cartoon illustrates the electoral districts drawn by the Massachusetts legislature to favor the incumbent Democratic-Republican party candidates of Governor Elbridge Gerry over the Federalists, from which the term gerrymander is derived. The cartoon depicts the bizarre shape of a district in Essex County as a dragon.

The county was created by the General Court of the Massachusetts Bay Colony on May 10, 1643, when it was ordered "that the whole plantation within this jurisdiction be divided into four sheires". Named after the county in England, Essex then comprised the towns of Salem, Lynn, Wenham, Ipswich, Rowley, Newbury, Gloucester, and Andover. In 1680, two towns from Massachusetts' colonial-era Norfolk County, Haverhill and Salisbury, both north of the Merrimack River, were annexed to Essex County, while the remainder was transferred to the Province of New Hampshire. These large founding settlements were then subdivided over the centuries to produce Essex County's modern composition of cities and towns.

Essex County is famous as the area that Elbridge Gerry (who was born and raised in Marblehead) districted into a salamander-like shape in 1812 that gave rise to the word gerrymandering.

According to the U.S. Census Bureau, the county has a total area of 828 square miles (2,140 km2), of which 493 square miles (1,280 km2) is land and 336 square miles (870 km2) (41%) is water. Essex County is adjacent to Rockingham County, New Hampshire to the north, the Atlantic Ocean (specifically the Gulf of Maine and Massachusetts Bay) to the east, Suffolk County to the south, Middlesex County to the west and a very small portion of Hillsborough County, New Hampshire to the far north west in Methuen. All county land is incorporated into towns or cities.

Essex County includes the North Shore, Cape Ann, and the lower portions of the Merrimack Valley.

Because of Essex County's rich history, which includes 17th century colonial history, maritime history spanning its existence, and leadership in the expansions of the textile industry in the 19th century, the entire county has been designated the Essex National Heritage Area by the National Park Service.

The following areas of national significance have also been preserved:

Essex County has been becoming increasingly diverse in recent years. By 2050, it is predicted that whites will become the minority.

On November 12, 1996, Essex National Heritage Area (ENHA) was authorized by Congress. The heritage area consists of all of Essex County, MA a 500-square-mile (1,300 km2) area between the Atlantic Coast and the Merrimack Valley. The area includes 34 cities and towns; two National Historic Sites (Salem Maritime National Historic Site and Saugus Iron Works National Historic Site); and thousands of historic sites and districts that illuminate colonial settlement, the development of the shoe and textile industries, and the growth and decline of the maritime industries — including fishing, privateering, and the China trade. The Essex National Heritage Area is one of 49 heritage areas designated by Congress, affiliated with the National Park Service.

The Essex National Heritage Commission is a non-profit organization chartered to promote tourism and cultural awareness of the area, connecting people to the places of Essex County, MA. The Commission's mission is to promote and preserve the historic, cultural and natural resources of the ENHA by rallying community support around saving the character of the area. This is accomplished through the commission's projects and programs which include; Partnership Grant Program, Explorers membership program, Photo Safaris, and the annual September weekend event 'Trails & Sails' as well as other important regional partnership building projects like the Essex Heritage Scenic Byway, and the Border to Boston trail.

The towns and cities of Essex County are listed below. They are incorporated under the current laws of the State of Massachusetts, even though in a number of cases the incorporation was accepted as a legacy from Massachusetts Bay Colony. A large number of traditionally recognized places are not. They are not listed here but may be in the articles for the incorporated places. All the territory of the state is under the jurisdiction of a city or town.

The list does not utilize the terminology of the U. S. Census Bureau, which is defined decannually. For example, the census-designated place (CDP) may or may not be comparable to any single municipality on the list. CDPs change frequently. The Bureau collects data on discrete populations defined to be appropriate to its mission at the time of the census. There is not necessarily a regard for political or traditional subdivisions, although those subdivisions typically play a major role.

The cities and towns on this list officially consider themselves to be so and are defined to be so by the laws of the State of Massachusetts. As government at the county level was dissolved in Essex County in 1999, the cities and towns are directly subordinate to the state. The county still plays a role in administrative districting by various governmental agencies in Massachusetts. Subordinate places may be defined by them on any basis, except that they have no separate corporate existence under those names.

All content from Kiddle encyclopedia articles (including the article images and facts) can be freely used under Attribution-ShareAlike license, unless stated otherwise. Cite this article:
Essex County, Massachusetts Facts for Kids. Kiddle Encyclopedia.