Middleton is a town in Essex County, Massachusetts, United States. The population was 9,779 at the 2020 census.

Middleton was first settled in 1659 and was officially incorporated in 1728. Prior to 1728 it was considered a part of Salem, and contains territory previously within the limits of Andover, Boxford, and Topsfield. The name Middleton is derived from its location midway between the important early settlements of Salem and Andover. It was first settled by Bray Wilkins, who came from Salem with a large family, having purchased six hundred acres from Governor Bellingham. The town grew as a farming community, mostly due to its location on the Ipswich River, with homesteads of hundreds of acres. However, during the 18th century Middleton also contained a vital ironworks industry, located in the area of what is now Mill and Liberty streets. This enterprise originally involved Thomas Flint, Sr. and his son, Thomas Flint Jr, of Salem, John How of Boxford, and Thomas Cave Jr. of Topsfield and was carried on for approximately seventy years.

In the late 18th and to the mid-19th centuries Middleton was a vacation town to those who lived in areas such as Lawrence and Lowell. It is home to one of the oldest trees in Massachusetts, being approximately 400 years old, and which is located at 39 Peabody Street. The oldest still standing house is the Wilkins house, which was built in 1693, and served as a tavern on the main road between Salem and Lawrence.

Middleton is one of the fastest growing towns in the Commonwealth, and the fastest on the North Shore. When locally grouped it is grouped with Salem, Danvers, and Beverly, but also occasionally Topsfield and Boxford, as these three towns are a tri-town. These three towns share Masconomet Regional High School (named after Chief Masconomet, sagamore of the Agawam tribe, which lived in Essex County at the time of English colonization) which serves grades 9-12, while its Middle School serves grades 7 and 8. 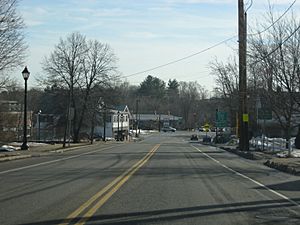 According to the United States Census Bureau, the town has a total area of 14.5 square miles (37.4 km²), of which 14.0 square miles (36.2 km²) is land and 0.5 square mile (1.2 km²) (3.32%) is water. Middleton lies along the border of Essex County, and is bounded by North Reading in Middlesex County to the west, and North Andover to the northwest, Boxford to the northeast, Topsfield to the east, Danvers to the southeast, Peabody to the south, and shares a 0.3 mile border with Lynnfield to the southwest. Middleton lies 8 miles northwest of Salem, 11 miles southeast of Lawrence, and 19 miles north of Boston.

Middleton lies in the low hills of northeastern Massachusetts. The Ipswich River flows through town, flowing from the North Reading/Lynnfield line along the Peabody and Danvers borders before turning northward into town, exiting along the border between Boxford and Topsfield. Several brooks feed into the river throughout town, and the town is also home to two larger ponds, Middleton Pond and Andover Meadow Pond, as well as several smaller ones. Within the town, there are portions of the Harold Parker State Forest and Boxford State Forest, as well as the Peabody Reservation, Sanford Reservation and Middleton Conservation Land.

Middleton lies just west of Interstate 95, with two very short parts of the highway passing through corners of the town before and after passing through Topsfield. There are exits off the highway in Boxford and in Danvers which both provide access to the town. Route 114, which follows the path of the old "Essex Turnpike", passes through the center of town, and is crossed there by Route 62, which merges with Route 114 for a 0.2 mile stretch there. There is no rail service within town; there are two lines (the Haverhill/Reading Line and the Newburyport/Rockport Line) of the MBTA Commuter Rail to the west and south of town, both of which provide access to Boston's North Station. The nearest small air service is located at Beverly Municipal Airport, with the nearest national and international air service being located at Logan International Airport.

There were 2,305 households, out of which 37.8% had children under the age of 18 living with them, 65.7% were married couples living together, 7.2% had a female householder with no husband present, and 24.3% were non-families. 20.0% of all households were made up of individuals, and 9.3% had someone living alone who was 65 years of age or older. The average household size was 2.76 and the average family size was 3.22.

All content from Kiddle encyclopedia articles (including the article images and facts) can be freely used under Attribution-ShareAlike license, unless stated otherwise. Cite this article:
Middleton, Massachusetts Facts for Kids. Kiddle Encyclopedia.