The Vezina Trophy is awarded every year to the National Hockey League's goaltender who is chosen as the best goaltender. At the end of each season, the 30 General Managers of the teams in the National Hockey League vote to determine the goaltender who was the most valuable to his team during the regular season. Before 1981, it was awarded to the goaltender(s) of the team allowing the fewest goals during the regular season; now, the William M. Jennings Trophy is awarded under this previous definition.

The Vezina Trophy was named for Georges Vézina, a very good goaltender with the Montreal Canadiens. Vezina was ill with tuberculosis. He felt sick during a game in 1925. When Vezina died, the trophy was given to the League by the former owners of the Montreal Canadiens, Leo Dandurand, Louis Letourneau and Joe Cattarinich. It was first awarded at the end of the 1926-27 NHL season.

Until the 1980–81 season, the trophy was awarded to the goaltender(s) of the team that gave up the fewest goals during the regular season. However, this system often meant the trophy went to the goaltender of the better team rather than the individual. A change was made to offer the William M. Jennings Trophy to the goaltender(s) playing for the team with the fewest goals against. Since 1981, the Vezina Trophy has been awarded by the NHL General Managers to the most outstanding goaltender. Billy Smith of the New York Islanders was the first winner of the Vezina under the current system.

There have been numerous instances of players receiving the trophy many times in different years. Players have also tied for the trophy. Jacques Plante holds the record for winning the most Vezinas with seven. Bill Durnan and Dominik Hasek both of who have won six. Hasek has won the most under the current system of honouring the best individual goalie. Players for the Montreal Canadiens have won the Vezina 28 times.

Under the original definition, there would often be multiple winners from the same team during one season. In the 1973-74 NHL season, Tony Esposito of the Chicago Black Hawks and Bernie Parent of the Philadelphia Flyers finished tied for the fewest goals against, the only time that there would be a tie between two players from different teams.

The voting is conducted at the end of the regular season by the 30 general managers of the teams in the National Hockey League. Each individual voter ranks their top three candidates on a 5-3-1 points system. Three finalists are named. The trophy is awarded at the NHL Awards ceremony after the playoffs.

When introduced, the Vezina Trophy was awarded to the goaltender, or goaltenders, of the team that gave up the fewest goals in regular season play. 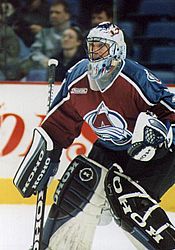 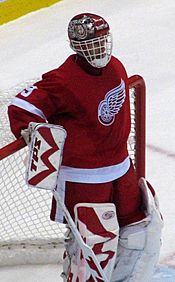 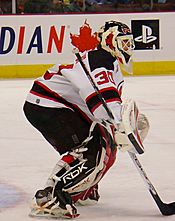 The NHL adopted the current criteria for the Vezina Trophy beginning in 1982. The William M. Jennings Trophy was created as a new award for the goaltender(s) of the team that surrenders the fewest goals in regular season play.

Player is still active in the NHL

All content from Kiddle encyclopedia articles (including the article images and facts) can be freely used under Attribution-ShareAlike license, unless stated otherwise. Cite this article:
Vezina Trophy Facts for Kids. Kiddle Encyclopedia.