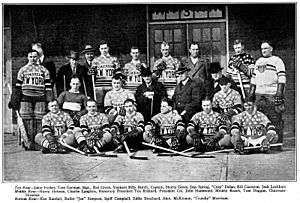 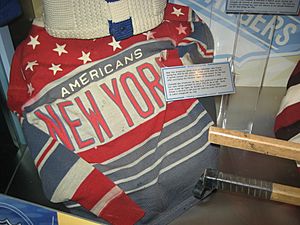 Team jersey on display in the Hockey Hall of Fame.

The New York Americans were a professional ice hockey team, the third expansion team in the history of the National Hockey League (NHL) and the second to play in the United States.

In 1941 the team name was changed to Brooklyn Americans, the name for a borough of New York City. After the 1941-42 season the team decided to stop competing until the end of World War II. When the war ended the NHL decided to not have the team play again.

All content from Kiddle encyclopedia articles (including the article images and facts) can be freely used under Attribution-ShareAlike license, unless stated otherwise. Cite this article:
New York Americans Facts for Kids. Kiddle Encyclopedia.