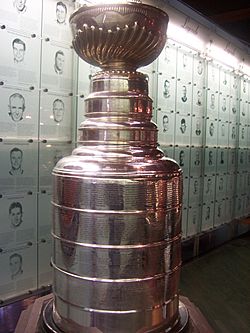 The Stanley Cup is a trophy given to the champion of the National Hockey League (NHL) every year.

The names of players and others such as coaches are put on the cup every year. As a result, the NHL had to make the cup bigger, by adding layers to the bottom. When the first cup was full of names, they made a copy of it, which is now what is awarded.

Today, there are 31 teams in the NHL. They play 82 games per year, and then 16 teams make the playoffs. These teams play best-of-seven series until there is only one champion.

Henri Richard of the Montreal Canadiens appears the most on the Stanley Cup, 11 times.

All content from Kiddle encyclopedia articles (including the article images and facts) can be freely used under Attribution-ShareAlike license, unless stated otherwise. Cite this article:
Stanley Cup Facts for Kids. Kiddle Encyclopedia.