Kristopher Royce Versteeg (born May 13, 1986) is a Canadian professional ice hockey winger currently playing for the Rockford IceHogs of the American Hockey League (AHL). He is a two-time Stanley Cup champion with the Chicago Blackhawks in 2010 and 2015.

Originally selected 134th overall in the 2004 NHL Entry Draft by the Boston Bruins, he played with the club's minor league affiliate, the Providence Bruins of the American Hockey League (AHL), for parts of two seasons before being traded to the Blackhawks. Versteeg continued playing in the AHL with the Blackhawks' affiliates until making his NHL debut during the 2007–08 season.

The following campaign, he received a nomination for the Calder Memorial Trophy as the NHL's best rookie. In his second full season with the Blackhawks, he helped the club win the Stanley Cup in 2010.

Following Chicago's Cup win, Versteeg played for the Toronto Maple Leafs, Philadelphia Flyers and Florida Panthers before being traded back to Chicago during the 2013–14 season, winning the Stanley Cup again in 2015. 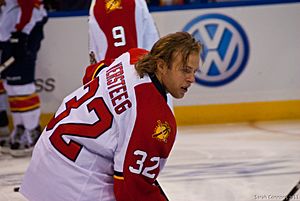 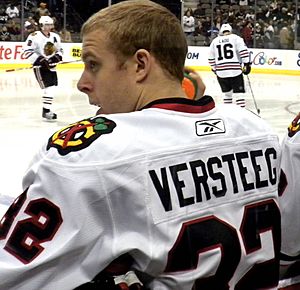 Kris Versteeg sitting on the bench during a game against the Dallas Stars at the American Airlines Center in Dallas, TX 2009

Versteeg's younger brother Mitch is currently a defenceman with the HK Nitra of the Tipsport liga which is the highest-level ice hockey league in Slovakia.

Versteeg has developed a reputation within the NHL for his habit of singing in public, as seen by his singing of a portion of Fergie's "Glamorous" on Mouthpiece Sports, as well as performing an altered version of LMFAO's "Yes" during the Chicago Blackhawks' Stanley Cup victory parade. Versteeg also sang Kanye West's verse of the Estelle song "American Boy" in a video clip on Blackhawks TV during his time with Chicago. He continued this tradition during the 2015 Championship Rally by singing Macklemore's "And We Danced" along with Joakim Nordström.

Versteeg has a tattoo on his upper right arm that reads "06 • 09 • 10" in commemoration of the date he won the Stanley Cup as a member of the Blackhawks. Versteeg and his wife, Brittany have two sons and a daughter.

All content from Kiddle encyclopedia articles (including the article images and facts) can be freely used under Attribution-ShareAlike license, unless stated otherwise. Cite this article:
Kris Versteeg Facts for Kids. Kiddle Encyclopedia.