The American Hockey League (AHL) is a professional ice hockey league based in the United States and Canada that serves as the primary developmental league for the National Hockey League (NHL). Since the 2010–11 season, every team in the league has an affiliation agreement with one NHL team.

In general, a player must be at least 18 years of age to play in the AHL or not currently be obligated to a junior ice hockey team. The league limits the number of experienced professional players on a team's active roster during any given game; only five skaters can have accumulated four full seasons of play or more at the professional level (goaltenders are exempt from this rule and can stay in the AHL indefinitely without being subject to this cap).

The annual playoff champion is awarded the Calder Cup, named for Frank Calder, the first President (1917–1943) of the NHL.

The formation of an American Hockey League Hall of Fame (AHL Hall of Fame) was announced by the league on December 15, 2005, created to recognize, honor and celebrate individuals for their outstanding achievements and contributions specifically in the AHL. 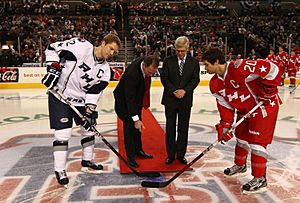 The American Hockey League first held an All-Star Game in the 1941–42 season. The event was not played again until the 1954–55 season, and was then held yearly until the 1959–60 season. In the 1994–95 season, the AHL revived the events again, and it has been played every season since.

All content from Kiddle encyclopedia articles (including the article images and facts) can be freely used under Attribution-ShareAlike license, unless stated otherwise. Cite this article:
American Hockey League Facts for Kids. Kiddle Encyclopedia.