Abbotsford is a city located in British Columbia, adjacent to the Canada–United States border, Greater Vancouver and the Fraser River. With an estimated population of 153,524 people it is the largest municipality in the province outside metropolitan Vancouver. Abbotsford-Mission has the third highest proportion of visible minorities among census metropolitan areas in Canada, after the Greater Toronto Area and the Greater Vancouver CMA. It is home to Tradex, the University of the Fraser Valley, and Abbotsford International Airport.

As of the 2021 census, it is the largest municipality of the Fraser Valley Regional District and the fifth-largest municipality of British Columbia. The Abbotsford–Mission metropolitan area of around 195,726 inhabitants as of the 2021 census is the 23rd largest census metropolitan area in Canada. It has also been named by Statistics Canada as Canada's most generous city in terms of charitable donations for nine straight years.

The community of 375.55 square kilometres (145.00 sq mi) is the largest city by area in British Columbia. The municipality's southern boundary is the Canada–United States border. In Canada, it is bordered by the Township of Langley to the west, the District of Mission to the north, and the City of Chilliwack to the east. Abbotsford borders the town of Sumas, Washington, to the south. Much of Abbotsford has views of Mount Baker (to the southeast, in Washington) and the Coast Mountains (to the north).

Abbotsford's colonial development began when the Royal Engineers surveyed the area in response to the gold rush along the Fraser River in 1858. This led to the building of Yale Road (today Old Yale Road), the first transportation route to link the Fraser Valley. The settlement grew and the production of butter, milk and tobacco began by the late 1860s. In 1889, former Royal Engineer John Cunningham Maclure applied for a Crown grant to obtain the 160 acres (0.65 km2) that would become Abbotsford.

There is some controversy over the origin of the Abbotsford name. The most commonly cited origin is that Maclure named the land "Abbotsford" after family friend Henry Braithwaite Abbott, the western superintendent of the Canadian Pacific Railway. Until 1922 the name was spelled Abottsford. Maclure's sons later stated that the property had actually been named for Sir Walter Scott's home, Abbotsford, and pronounced it with the accent on ford, while in his later years Maclure himself claimed that the naming had been "a combination of two ideas".

The title passed hands to Robert Ward, who filed a townsite subdivision on July 9, 1891. Also in 1891, the CPR built a railway line through the area that connected Mission with the Seattle, Lake Shore and Eastern Railway at Sumas, Washington. This route was the only rail connection between Vancouver and Seattle until 1904. The Village of Abbotsford was incorporated in 1892. At that time Robert Ward sold many of the lots to private investors, but also sold off a significant portion to the Great Northern Railway’s subsidiary company the Vancouver, Victoria and Eastern Railway. The British Columbia Electric Railway (BCER) arrived in 1910. The Interurban, as the BCER tram linking Abbotsford with Vancouver and Chilliwack was called, was discontinued in 1950, but BCER's successor BC Hydro retains the right to re-introduce passenger rail service. Service to Vancouver runs from neighbouring Mission by way of the West Coast Express.

The most notable natural disaster to hit Abbotsford was a major flood of the Fraser River in 1948.

In September 1984 Pope John Paul II held an open-air mass for over 200,000 people at the Abbotsford International Airport.

In June 2013, the City of Abbotsford spread chicken manure on a homeless camp located in the city. Abbotsford Mayor Bruce Banman publicly apologized for the incident. A lawsuit was launched on behalf of some of the homeless, stating that a bylaw which prevents overnight camping in Abbotsford parks is against their right to shelter. The city has formed a homelessness action plan, and has approved a proposal for a supportive housing facility.

The Abbotsford metropolitan area has Canada's highest proportion of South Asians. In 2016, the City of Abbotsford had 35,310 South Asians, while the Abbotsford CMA had 38,250. Indo-Canadians in Abbotsford have worked in berry farms and in area businesses. Members of the ethnic group first arrived in the early 1900s to work on farms and in the lumber industry. In 1911, the Gur Sikh temple was built in Abbotsford. With the distinction of being the oldest existing Sikh temple in North America, it is also a Canadian National Historic Site.

Abbotsford has the third highest proportion of visible minorities among Census Metropolitan Areas in Canada, after the Greater Toronto Area and Greater Vancouver.

More than a quarter (26.1%) of the city's population was born outside Canada. Of that percentage, a majority is from South Asia, followed by groups from China, South Korea, Southeast Asia and Latin America. English is the primary language spoken, with 78.7% of the population having it as their first language.

The majority of Abbotsford's population is Christian, with 61.4% of the population. Many of the largest congregations in the city are Mennonite Brethren. The next largest religious group is Sikh, comprising 13.4% of the population. The city contains the first Sikh Gurdwara built in Canada (in 1911), and the oldest in North America. A National Historic Site, located in Central Abbotsford, it is now over 100 years old.

Abbotsford has an oceanic climate (Köppen climate type Cfb), with just enough summer precipitation not to be classified as warm-summer mediterranean.

The Abbotsford Arts Council hosts a number of free local events including music in Mill Lake Park, the Arty Awards and more recently, the Christmas Artisan Gift Fair. It has been involved in projects such as the Abbotsford "Unity Statue", Abbotsford Christmas Craft Fair, Art in the Park, Abbotsford's Art and Heritage Unity Festival, and the Historical Downtown Art Bench Project. As well as maintaining the Kariton Art Gallery which features and hosts exhibitions from local artists of all mediums residing in the Lower Mainland.

The Reach Gallery Museum features exhibitions from across Canada and around the world, as well as the work of local artists. It houses a heritage archive, runs special events, programs and courses and seeks to promote local arts and culture.

Gallery 7 Theatre and Performing Arts has been one of Abbotsford only performing arts organizations since 1991 and operates out of Mennonite Educational Institute. They produce four mainstage productions every year.

Public bus transportation is provided by the Central Fraser Valley Transit System. Passenger rail service to Vancouver currently runs from nearby Mission by way of the West Coast Express. 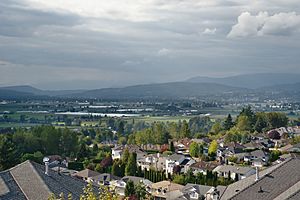 These places represent parts of the city that have more than one neighbourhood in them. 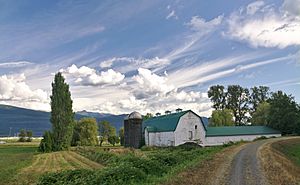 Farmhouse and barn in Abbotsford

Some 62 percent of residents in Abbotsford work in the City of Abbotsford itself. Most of the remaining 38 percent commute to Mission, Chilliwack or Vancouver and its suburbs (primarily Surrey and Langley). More than 25 percent of Abbotsford's work force commutes to Abbotsford from other municipalities.

The Conference Board of Canada has identified the local economy as one of the most diverse in the country. Abbotsford's main industries are agriculture, transportation, manufacturing and retail. The city earns the highest dollar per acre of agricultural land in the country, greater than the Niagara Region and the North Okanagan. Total sales from agricultural businesses grew from $635,000,000 in 2010 to nearly $1 billion as of 2021 and accounts for almost 50% of all chicken eggs and dairy milk production for all of British Columbia.

The BC government's Animal Health Centre, at the Abbotsford Agriculture Centre offers "more than 400 laboratory diagnostic tests for agents that may be found in wild and domestic birds, mammals, fish, reptiles and amphibians" and is the leading accredited full-service veterinary laboratory in Western Canada. The facility has housed a Biosafety level 3 laboratory since October 2009.

Abbotsford Regional Hospital and Cancer Centre and community health services make Fraser Health the city's largest employer with about 2,500 staff. The city is also home to three federal prisons, each of which employs between 200 and 500 officers and support staff. There is also a growing aerospace industry led by Cascade Aerospace and Conair Group Inc.

Local and privately owned confectionery company Brookside Foods was acquired by The Hershey Company in 2011. In 2016, it announced it would be closing.

Abbotsford Minor Hockey is one of the largest associations in British Columbia with more than 1000 players registered from the ages of 5 through 18 years old. This association is recognized by many as a model and a leader in the development of minor hockey programs, and several Abbotsford-raised players have gone on to the highest levels of this sport. In the 2005–06 hockey season, Abbotsford's bantam AAA team were ultimately the Western Canadian Bantam Champions, and eight individual players from this team (the most ever) were selected in the 2006 WHL Bantam Draft.

The Abbotsford Pilots of the Pacific International Junior Hockey League (junior B level) play at MSA Arena, which is Abbotsford's second largest arena at just over 400 seats. Abbotsford was considered as a possible home for the Chilliwack Chiefs (junior A), who were forced to move in 2006 when the Chilliwack Bruins (a WHL expansion team) took over their arena, Prospera Centre. Abbotsford would have become the home of the Chiefs if the city had supported them in building a new arena; instead, the Chiefs moved to Langley. Construction has now been completed in Abbotsford on a far bigger sports and entertainment centre (with 7,500 seats).

On May 6, 2021, the NHL's Vancouver Canucks were approved to relocate their AHL affiliate to Abbotsford for the 2021–22 season as the Abbotsford Canucks.

From 2012 and 2013, the BC Angels of the Legends Football League's LFL Canada division played at the Abbotsford Entertainment & Sports Centre.

Abbotsford's Jane and Gerry Swan Track at Rotary Stadium is home to the Valley Royals Track & Field Club, who have produced numerous Olympians including two for the 2008 Olympics. Rotary Stadium was also home to the now-defunct Abbotsford Air Force of the Canadian Junior Football League.

Abbotsford's rugby club supports three men's teams, two women's teams, U19 men's and women's, U15 U16 and U17 men's, and a great mini rugby program. Many of Abbotsford's players have gone on to play for Canada, such as Erin Lockwood, Ryan McWhinney, Scott Hunter and Brodie Henderson.

Forty-six public elementary, middle, and secondary schools are administered by the Abbotsford School District. This includes a virtual school called the "Abbotsford Virtual School" that offers more than 30 semestered online courses. This school offers a unique animation and modeling program that teaches students aspects of the video game industry.

Post-secondary institutions in the city include the University of the Fraser Valley, religious institutions such as Columbia Bible College and Summit Pacific College, as well as career colleges such as Career Gate Community College, Sprott Shaw College, Vancouver Career College, Métis Skills and Employment Centre, and CDI College.

All content from Kiddle encyclopedia articles (including the article images and facts) can be freely used under Attribution-ShareAlike license, unless stated otherwise. Cite this article:
Abbotsford, British Columbia Facts for Kids. Kiddle Encyclopedia.