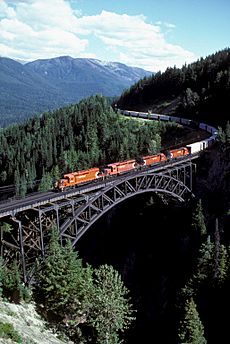 The Canadian Pacific Railway (CPR), also known as CP Rail (CP) is a railway in North America with track in both Canada and the United States. It was built between Eastern Canada and British Columbia between 1881 and 1885. Although it used to go all the way to Atlantic Canada, it does not do so anymore.

When British Columbia became part of Canada in 1871, one of the promises the federal government made was to link it to the rest of Canada by rail. Most of the trains that use the CPR carry freight, and the CPR used to run passenger train services until they were taken over by Via Rail in 1978. For many years, until the airplane was invented, the railway was the only way to move people across the country. Because of this, it had a big role in the settlement and development of Western Canada.

The company that owns the CPR, Canadian Pacific Railway Limited, was once one of the largest and most powerful companies in Canada. It owns about 20,000 kilometres (12,500 mi) of track from Montreal in the east to Vancouver in the west and Edmonton to the north. CP also has track in Minneapolis-Saint Paul, Milwaukee, Detroit, Chicago, and New York City in the United States.

The logo of the CPR company is a beaver, the national symbol of Canada, and it has its headquarters in Calgary, Alberta and its U.S. operations are in Minneapolis. It trades on both the Toronto Stock Exchange and the New York Stock Exchange under the ticker CP.

All content from Kiddle encyclopedia articles (including the article images and facts) can be freely used under Attribution-ShareAlike license, unless stated otherwise. Cite this article:
Canadian Pacific Railway Facts for Kids. Kiddle Encyclopedia.