Western Canada, also referred to as the Western Provinces and more commonly known as the West, is a region of Canada that includes the four western provinces just north of the Canada-United States border, namely (from west to east) British Columbia, Alberta, Saskatchewan and Manitoba.

British Columbia, mostly on the western side of the Canadian Rockies, is culturally, economically, geographically and politically distinct from the other three provinces, and often referred to as the "west coast"; while Alberta, Saskatchewan and Manitoba, completely east of the Canadian Rockies, sometimes form a subset together as the "Prairie Provinces" (commonly known as "the Prairies").

Edmonton is the largest provincial capital city by population in western Canada.

The capital cities of the four western provinces, from West to East, are; Victoria (British Columbia), Edmonton (Alberta), Regina (Saskatchewan) and Winnipeg (Manitoba). Except for Winnipeg, which is the largest city in Manitoba; all the provincial capitals of the Western Provinces are located in second-largest metropolitan areas of their respective province.

Calgary is the largest municipality by population in western Canada. 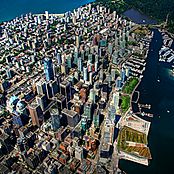 Vancouver is the largest census metropolitan area by population in western Canada. 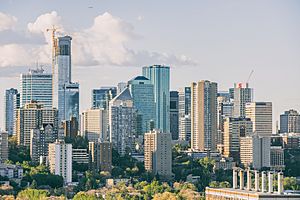 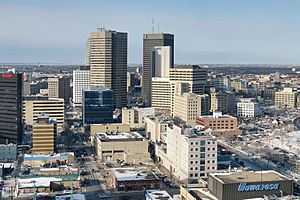 Centred on the intersection of Portage and Main, Downtown Winnipeg is the city's central business district.

As of the 2016 Census, Statistics Canada recognized ten census metropolitan areas within Western Canada, including four in British Columbia, three in Alberta, two in Saskatchewan, and one in Manitoba. The following is a list of these areas and their populations as of 2016.

The Canadian Prairies are part of a vast sedimentary plain covering much of Alberta, southern Saskatchewan, and southwestern Manitoba. The prairies form a significant portion of the land area of Western Canada. The plains generally describes the expanses of largely flat, arable agricultural land which sustain extensive grain farming operations in the southern part of the provinces. Despite this, some areas such as the Cypress Hills and Alberta Badlands are quite hilly and the prairie provinces contain large areas of forest such as the Mid-Continental Canadian forests.

In Alberta and British Columbia, the Canadian Cordillera is bounded by the Rocky Mountains to the east and the Pacific Ocean to the west.

The Canadian Rockies are part of a major continental divide that extends north and south through western North America and western South America. The continental divide also defines much of the border between Alberta and British Columbia. The Columbia and the Fraser Rivers have their headwaters in the Canadian Rockies and are the second- and third-largest rivers, respectively, to drain to the west coast of North America. To the west of their headwaters, across the Rocky Mountain Trench, is a second belt of mountains, the Columbia Mountains, comprising the Selkirk, Purcell, Monashee and Cariboo Mountains sub-ranges. 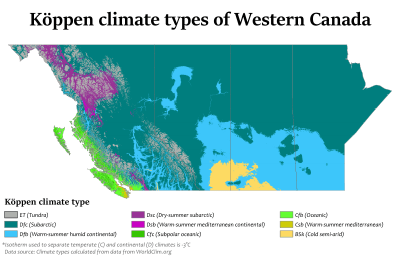 The coast of British Columbia enjoys a moderate oceanic climate because of the influence of the Pacific Ocean, with temperatures similar to those of the British Isles (though Vancouver receives more precipitation than London and most of the Coast is much wetter)..

Alberta has a dry continental climate with warm summers and cold winters. The province is open to cold Arctic weather systems from the north, which often produce extremely cold conditions in winter. Winters are generally quite cold, though some areas can experience a phenomenon known as the "chinook wind," wherein warm winds raise the winter temperatures temporarily. In contrast, summers can fluctuate from cool to hot and are generally wetter.

Saskatchewan and Manitoba have a continental climate and experience extremes in weather. Winters in both provinces can be classified as harsh with Arctic winds and −40 °C (−40 °F) temperatures possible. Winter temperatures in both provinces average between −10 and −15 °C (14 and 5 °F). In contrast summers can be hot with temperatures exceeding 35 °C (95 °F) at least once per year in most locations. The hottest temperature ever recorded in Canada was 45 °C (113 °F), observed in 1943 at the weather stations of Yellow Grass, Saskatchewan and neighbouring Cedoux.

In Canadian politics, the term "the West" is used misleadingly in Canadian media styleguides as shorthand for the Conservative leanings of Western Canadians, as contrasted with the greater likelihood for candidates from either the Liberal Party of Canada or the New Democratic Party (NDP) to be elected in Central Canada. Exceptions exist, particularly in British Columbia, as well as in the prairie city of Winnipeg, and where the Liberal Party hold seats, as well as in other major urban centres such as Edmonton where Liberal and NDP candidates have been elected in recent history. The social democratic NDP had its origins on the Canadian Prairies and in the mining and pulp mill towns and railway camps of British Columbia, and has a history of support in Manitoba, and British Columbia.

Regarding provincial politics, as of June 2015, the British Columbia Liberal Party forms the provincial government in British Columbia, though despite the name is not formally allied with the federal Liberal Party and is widely seen as conservative in nature and is composed of elements from the federal Conservative Party's right wing, including many ex-Reform Party supporters. The Saskatchewan Party, also a conservative party, holds power in Saskatchewan and the NDP forms the government in Alberta.

The western provinces are represented in the Parliament of Canada by 104 Members of Parliament (MPs) in the House of Commons (British Columbia 42, Alberta 34, Saskatchewan and Manitoba 14 each) and 24 senators (6 from each province). Currently, of the 104 western MPs in the Commons, 54 are Conservatives, 20 are New Democrats, and 29 are Liberals.

The West has been the most vocal in calls for reform of the Senate, in which Ontario, Quebec, and particularly Atlantic Canada are seen by some westerners as being over-represented. The population of Ontario alone (13.1 million) exceeds that of all the Western provinces combined. The total population of Atlantic Canada, however, is 2.3 million, and this region is represented by 30 senators. Thus, Ontario is under-represented, Quebec has representation proportional to its population and the Atlantic provinces are over-represented. Westerners have advocated the so-called Triple-E Senate, which stands for "equal, elected, effective." They feel if all 10 provinces were allotted an equal number of senators, if those senators were elected instead of appointed, and if the Senate were a body that had more direct political power (for example via an arrangement more similar to the structure of the Australian Senate or the United States Senate rather than the UK model), then their region would have more of its concerns addressed at the federal level. Other westerners find this approach simplistic and either advocate keeping the status quo or may support other models for senate reform. The combination of all of these issues has led to the concept known as Western alienation, as well as calls for Western Canada independence by various fringe groups.

Since at least the 1930s, economic conditions have contributed to a net emigration from Manitoba and Saskatchewan to Alberta and British Columbia, which have generally provided greater employment opportunities and higher living standards. The population of Saskatchewan is only slightly larger than it was in 1931. This trend of net emigration in both provinces is reversing because of a lower cost of living than Alberta and B.C. 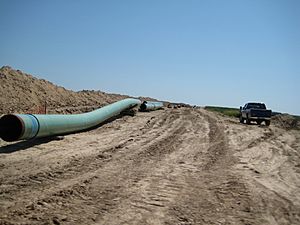 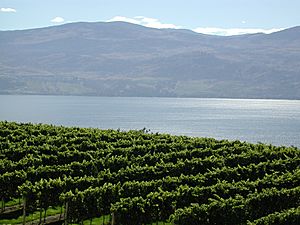 All content from Kiddle encyclopedia articles (including the article images and facts) can be freely used under Attribution-ShareAlike license, unless stated otherwise. Cite this article:
Western Canada Facts for Kids. Kiddle Encyclopedia.