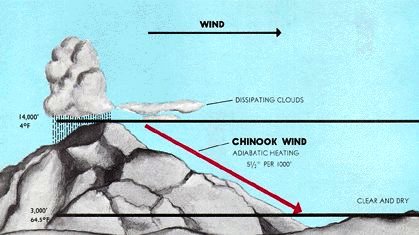 A chinook is a warm westerly wind that sometimes flows over Canada's Rocky Mountains in the winter. It can raise temperatures in southern Alberta by twenty or thirty degrees in an hour.

A chinook is caused when air flowing off the Pacific Ocean is raised by the mountains and heated as the water vapor in the air condenses. Then it is warmed more as it flows down the other side of the mountains and is compressed. It flows out over the prairie, and may travel as far as the eastern border of Alberta if it is especially strong.

The chinook is also called "snow eater", because it can melt snow so quickly.

One of its most striking features is the Chinook arch, a föhn cloud in the form of a band of stationary stratus clouds caused by air rippling over the mountains due to orographic lifting. To those unfamiliar with it, the Chinook arch may look like a threatening storm cloud at times. However, they rarely produce rain or snow. They can also create stunning sunrises and sunsets.

The stunning colours seen in the Chinook arch are quite common. Typically, the colours will change throughout the day, starting with yellow, orange, red and pink shades in the morning as the sun comes up, grey shades at midday changing to pink / red colours, and then orange / yellow hues just before the sun sets.

All content from Kiddle encyclopedia articles (including the article images and facts) can be freely used under Attribution-ShareAlike license, unless stated otherwise. Cite this article:
Chinook Facts for Kids. Kiddle Encyclopedia.