Southern Alberta is a region located in the Canadian province of Alberta. In 2004, the region's population was approximately 272,017. The primary cities are Lethbridge and Medicine Hat. The region is known mostly for agricultural production, but other sectors, such as alternative energy, film production and tourism, are emerging. 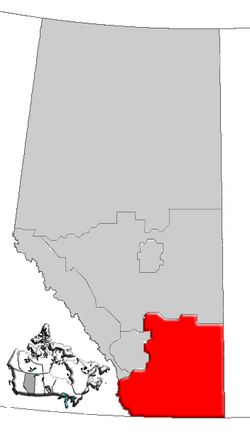 Southern Alberta is in the northern Great Plains region, lined to the west by the Canadian Rockies and their foothills. The rest of region is dominated by the semi-arid prairies of the Palliser's Triangle, where farms and ranches have been built, often with the help of irrigation. Rivers generally flow from west to east and include the Oldman River, Bow River, Red Deer River and South Saskatchewan River.

The environment is protected in such areas as Waterton Lakes National Park, Cypress Hills Interprovincial Park and Writing-on-Stone Provincial Park, while sites such as Head-Smashed-In Buffalo Jump and Dinosaur Provincial Park were declared UNESCO World Heritage Sites. The Alberta Badlands are developed in the north-east of the region, prominently along the Red Deer River. Cypress Hills, located in the east, at the border with Saskatchewan, are the highest point between the Rocky Mountains and Labrador.

In 2007, Alberta Human Resources and Employment reported the fields of finance, insurance, real estate, professions, technicians and senior managers will lead the Lethbridge–Medicine Hat region's growth with an average 2.8% real GDP growth each year until 2011. The industries of manufacturing, energy, mining and forestry would account for 2.6% each. All ten of these fields would account for more than half of the region's domestic product.

All content from Kiddle encyclopedia articles (including the article images and facts) can be freely used under Attribution-ShareAlike license, unless stated otherwise. Cite this article:
Southern Alberta Facts for Kids. Kiddle Encyclopedia.