Brooks is a city in southeast Alberta, Canada, surrounded by the County of Newell. It is located on Highway 1 (Trans-Canada Highway) and the Canadian Pacific Railway, approximately 186 km (116 mi) southeast of Calgary, and 110 km (68 mi) northwest of Medicine Hat. The city has an elevation of 760 m (2,490 ft).

The area that is now Brooks was originally used as a bison hunting ground for the Blackfoot and Crow. After Treaty 7 was signed in 1877, homesteaders moved into the area to begin farming. Before 1904, the area still did not have a name. Through a Postmaster General-sponsored contest, the area was named after Noel Edgell Brooks, a Canadian Pacific Railway Divisional Engineer from Calgary.

In the 1996 Census, the population of Brooks reached 10,093 making it eligible for city status. Brooks incorporated as a city on September 1, 2005 when its official population was 11,604.

In 2010, Brooks celebrated its centennial as a municipality since originally incorporating as a village in 1910.

A multicultural community, Brooks has been referred to as "The City of 100 Hellos" as a result of a documentary by Brandy Yanchyk profiling the community's significant immigrant, refugee and temporary foreign worker populations. The documentary was called Brooks – The City of 100 Hellos and was created in 2010 for Omni Television. The community's multicultural character was also the subject of a 2007 National Film Board of Canada documentary, 24 Days in Brooks, directed by Dana Inkster. 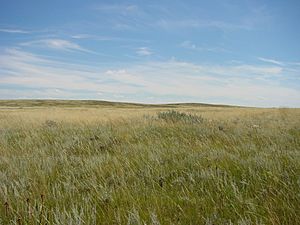 Brooks is located in the Grassland Natural Region of Alberta. The area surrounding Brooks is dry mixed grass/shortgrass prairie.

Located in the steppe region known as the Palliser's Triangle, Brooks has a semi-arid climate (Köppen climate classification BSk). Winters are dry and cold, with little snowfall compared to the rest of Canada. Chinook winds, though less common than in areas west and especially southwest of Brooks, are not uncommon, and ameliorate the cold winter temperatures temporarily when they pass over. Wide diurnal temperature ranges are regular, due to the aridity and moderately high elevation. Low humidity is prevalent throughout the year. Most of the relatively scant annual precipitation occurs in late spring and summer, often in the form of thunderstorms. On average, the coldest month is January, with a mean temperature of −10.1 °C (13.8 °F), while the warmest is July, with a mean temperature of 19.6 °C (67.3 °F). The driest month is February, with an average monthly precipitation of 9.1 mm (0.36 in), while the wettest month is June, with an average of 74.2 mm (2.92 in). Annual precipitation is low, with an average of 301.3 mm (11.86 in).

Brooks has won the Communities in Bloom competition four times in a row. Brooks has won Tidiness and Community Involvement Awards at a national level.

The Brooks Public Library, with a collection of over 50,000 items, serves both the City of Brooks and the County of Newell.

The Lakeside Leisure Centre is the area's main recreation centre. It includes one arena, a curling rink, an aquatic centre with a waterslide and wave pool, a gymnasium, a fitness centre, and multipurpose rooms. The complex was renovated in 2005.

In 2010, the Duke of Sutherland Park was redeveloped. It features baseball diamonds, a soccer field, a playground and a 3,200 ft (980 m)² waterpark with spray features for toddlers and a play structure for older children.

Also in 2010, the Centennial Regional Arena was completed after nearly a decade of planning and 18 months of construction. The multi-purpose facility seats 1,704 people. It includes corporate boxes, a running track, concessions, and a 200 ft × 85 ft (61 m × 26 m) surface. The arena is home to several user groups, including the Brooks Bandits.

The Brooks Aqueduct southeast of Brooks was built to transport irrigation water across the Eastern Irrigation District. It spans across a 3.2 km (2.0 mi) valley, about 20 m (66 ft) above the ground.

All content from Kiddle encyclopedia articles (including the article images and facts) can be freely used under Attribution-ShareAlike license, unless stated otherwise. Cite this article:
Brooks, Alberta Facts for Kids. Kiddle Encyclopedia.