Medicine Hat is a city in southeast Alberta, Canada. It is located along the South Saskatchewan River. It is approximately 169 km (105 mi) east of Lethbridge and 295 km (183 mi) southeast of Calgary. This city and the adjacent Town of Redcliff to the northwest are within Cypress County. Medicine Hat was the sixth-largest city in Alberta in 2016 with a population of 63,230. It is also the sunniest place in Canada according to Environment and Climate Change Canada, averaging 2,544 hours of sunshine a year.

Started as a railway town, today Medicine Hat is served by the Trans-Canada Highway (Highway 1) and the eastern terminus of the Crowsnest Highway (Highway 3). Nearby communities considered part of the Medicine Hat area include the Town of Redcliff (abutting the city's northwest boundary) and the hamlets of Desert Blume, Dunmore, Irvine, Seven Persons, and Veinerville. The Cypress Hills (including Cypress Hills Interprovincial Park) is a relatively short distance (by car) to the southeast of the city.

Historically, Medicine Hat has been known for its large natural gas fields, being immortalized by Rudyard Kipling as having "all hell for a basement". Because of these reserves, the city is known as "The Gas City".

The name "Medicine Hat" is the English translation of Saamis (SA-MUS) – the Blackfoot word for the eagle tail feather headdress worn by medicine men – or "Medicine Hat". Several legends are associated with the name from a mythical mer-man river serpent named Soy-yee-daa-bee – the Creator – who appeared to a hunter and instructed him to sacrifice his wife to get mystical powers which were manifest in a special hat. Another legend tells of a battle long ago between the Blackfoot and the Cree in which a retreating Cree "Medicine Man" lost his headdress in the South Saskatchewan River.

A number of factors have always made Medicine Hat a natural gathering place. Before Europeans arrived, the Blackfoot, Cree and Assiniboine nations used the area for hundreds of years. The gently sloping valley with its converging waterways and hardy native cottonwood trees attracted both humans and the migratory bison herds which passed through the area.

In 1883, when the Canadian Pacific Railway (CPR) reached Medicine Hat and crossed the river a town site was established using the name from the First Nations legends. As the west developed, Medicine Hat became instrumental with the development of the first hospital past Winnipeg in 1889 and as a CPR divisional point. It was incorporated as a town on October 31, 1898, and as a city on May 9, 1906. Medicine Hat is halfway between Winnipeg and Vancouver.

Rich in natural resources including natural gas, coal, clay, and farmland, the town was known in the early days as "the Pittsburgh of the West". A number of large industries located here, under the inducement of cheap and plentiful energy resources. Coal mines, brick works, pottery and glass bottle manufacturing plants, flour mills, etc. became established. The agricultural potential of the surrounding area, both in crop and livestock, also made the town a viable service centre with a well established transportation route. An economic boom was experienced between 1909–1914 bringing the population to over 10,000. Little growth occurred between the World Wars, although the population swelled in the mid-1940s due to the town hosting one of the largest Second World War P.O.W. camps in Canada. It was not until the 1950s that the town again experienced significant commercial development. Today, Medicine Hat prides itself as one of the most economical places to live in Canada, with its unique city-owned gas utility and power generation plant being predominant factors. Major industries have included chemical plants, a Goodyear tire and rubber plant, greenhouses, numerous oil and gas related companies, a foundry, I-XL Industries (a brickworks dating from the 1880s), to name a few. 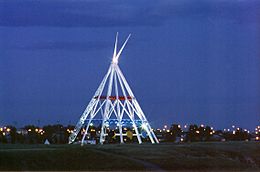 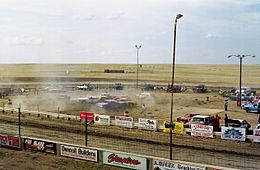 The Medicine Hat landscape is dominated by the South Saskatchewan River valley. In addition to this major river, both the Seven Persons Creek and Ross Creek empty into the South Saskatchewan River within the City of Medicine Hat boundary. The presence of these water bodies provide for a dramatic valley landscape with numerous cliffs, and finger coulees throughout the city. Beyond the city and river valley the land is flat to slightly rolling and is characterized by short-grass vegetation. Medicine Hat is also known as Canada's sunniest city.

Located in the steppe region known as Palliser's Triangle, Medicine Hat has a semi-arid, continental climate (Köppen climate classification BSk), with cold winters, and warm to hot, dry summers. Frequently, the winter cold is ameliorated by mild and dry chinook winds blowing from the west, and hot summer daytime temperatures are made more tolerable by low humidity and rapid cooling in the evening hours. Medicine Hat receives less precipitation annually than most other cities on the Canadian Prairies and plentiful sunshine (widely known as "The sunniest city in Canada"), making it a popular retirement city. Maximum precipitation typically occurs in the late spring and early summer.

More than 79 percent of residents identified as Christian at the time of the 2001 census while almost 20 percent indicated they had no religious affiliation. For specific denominations Statistics Canada counted 16,175 Roman Catholics (26.5 percent), 9,445 members of the United Church of Canada (15.5 percent), and 6,170 Lutherans (slightly more than 10 percent). Less numerous denominations included 3,780 Anglicans (more than 6 percent), 1,745 members of the Evangelical Missionary Church (almost 3 percent), 1,470 Baptists (over 2 percent), 1,220 identifying as Pentecostal (2 percent), 1,220 Latter-day Saints (2 percent), and 675 Presbyterians (just over 1 percent). 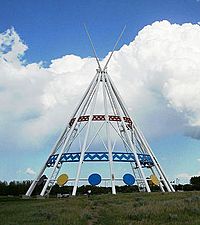 The Medicine Hat Clay Industries National Historic District is a living, working museum that offers a unique and extensive experience through collections, exhibits, interpretation, guided tours and educational and artistic programming. The Medalta Potteries and Hycroft China Factory Complexes are the focal points in this 150-acre (0.6 km2) region. This nationally recognized industrial historic district is a cultural initiative of the Friends of Medalta Society with Federal, Provincial, Municipal and Private support. Restoration, preservation and cultural development of the Medicine Hat Clay Industries National Historic District for the purpose of education and public enjoyment is ongoing.

Just south of the Trans-Canada Highway and overlooking the Blackfoot buffalo jump is the world's tallest teepee, the "Saamis Teepee". Designed for the 1988 Winter Olympics in Calgary as a symbol of Canada's Aboriginal heritage, it was moved to Medicine Hat in 1991. It stands over 20 stories high and was designed to withstand extreme temperatures and winds up to 240 km/h (150 mph). During a January 2007 windstorm, a portion of the teepee was damaged. Upon further inspection, it was discovered that extensive weathering was partially to blame. After repairs were complete, the Saamis Teepee now stands approximately 15 feet (4.6 m) shorter.

The Medicine Hat Family Leisure Centre is the largest indoor multi-purpose facility in the city. The building is 90,000 sq ft (8,000 m2) and is sited on 57 acres (230,000 m2) in the north end of the city. The facility includes an Olympic-sized ice rink, 50m pool, waterslide, diving platforms, kiddies pool, wave pool and cafe. It is currently undergoing an extensive renovation to include an indoor soccer facility, track and improved fitness centre. The improvements will almost double the size of the facility. In the area surrounding the Leisure Centre facility there are several other sporting venues including; 4 ball diamonds, lighted football field, 3 soccer pitches and one of the largest BMX racing facilities in Southern Alberta.

The Medicine Hat Drag Racing Association is located just off the Trans Canada Highway on Boundary Road or the spectators entrance on Box Springs Road. This is Alberta's only sanctioned NHRA track and is a 1/4 mile in length. The facility proudly supports affordable family entertainment and encourages people to race the strip, not the street. The seasons typically run from May till September hosting a variety of events from jet and alcohol cars, bracket racing and the NHRA National open which attracts approx. 300+ cars from all over North America.

Medicine Hat Public Library is located across the street from The Esplanade. It has over 10,000 annual members and is the resource library for the Shortgrass Library System of Southern Alberta.

There are over 100 kilometres (62 mi) of walking trails in the city. All of the major parks are linked by the extensive trail system. 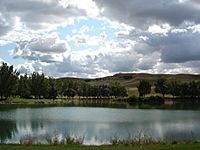 View of the pond at Echodale Regional Park

Medicine Hat is home to the South Alberta Light Horse (SALH), an army reserve unit. The SALH dates back to 1885 when it took part in the North-West Rebellion. Since then it has gained battle honours in the First and Second World Wars and today its members continue to serve overseas on United Nations and North Atlantic Treaty Organization missions. Currently the SALH has members serving in Afghanistan.

Medicine Hat was also home to a British Commonwealth Air Training Plan airfield and a POW camp during the Second World War.

Canadian Forces Base Suffield is located 50 kilometres (31 mi) west of the city. It is estimated that the base contributes C$120 million annually to the local economy, principally through its two lodger units: British Army Training Unit Suffield, and Defence Research and Development Canada – Suffield).

The city is home to the Medicine Hat Tigers, a major junior ice hockey team in the Western Hockey League (WHL). Established in 1970, the team has won seven division titles, five WHL league championships and back-to-back Canadian Hockey League (CHL) Memorial Cup national championships in 1987 and 1988 in its history. Numerous Tigers alumni moved on to play in the National Hockey League (NHL). Lanny McDonald played WHL hockey for the Medicine Hat Tigers. He played in 1971–1972 and scored 50 goals and assisted on 64 goals. In 1972–1973 seasons he scored 62 goals and 77 assists. They play at Co-op Place which opened in 2015 and replaced the 40-year-old Medicine Hat Arena.

Medicine Hat School District No. 76 has been serving the needs of public school students since it came into existence in 1886. The district has five trustees and comprises three secondary schools, Alexandra Middle School (formerly Alexandra Junior High School), Crescent Heights High School and Medicine Hat High School, 12 elementary (K–6) schools, a special needs school for the severely disabled, as well as an Alternative School program which incorporates a joint partnership with the YMCA Teen Moms' Program, YMCA Stay-in-School Program, a program with the former Palliser Health Region for secondary students and a program supported by Alberta Children Services for students with behavioural needs. French immersion programming is provided as an option at one elementary school and at Crescent Heights High. The district currently works with the BHTH Institution for Education, part of the International Education Association of Western Canada, to operate an international educational program in China and three schools have joined this program, Tangshan Caofeidian #2 School, Qinhuangdao Foreign Language School, and Shandong Weifang Middle School.

The Medicine Hat Catholic/Separate School District provides educational programming for students from kindergarten through Grade 12. French immersion programming is provided as an option in select District schools. It operates one high school, Monsignor McCoy, and nine other schools.

Medicine Hat also has a Francophone school, École Les Cyprès, and a public/charter school, the Centre for Academic and Personal Excellence (CAPE).

Alberta Transportation is currently negotiating with landowners south of the city to secure land for the future Highway 1 (Trans-Canada Highway) bypass. The bypass is expected to be constructed in the next 10–20 years.

Beginning in 2009, several ICT business leaders began working together to facilitate economic growth and diversify the local economy by building a robust community network based on fiber optic technologies.

All content from Kiddle encyclopedia articles (including the article images and facts) can be freely used under Attribution-ShareAlike license, unless stated otherwise. Cite this article:
Medicine Hat Facts for Kids. Kiddle Encyclopedia.