List of municipal districts in Alberta facts for kids 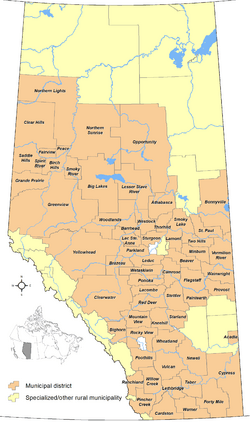 A municipal district is the most common form of all rural municipality statuses used in the Canadian Province of Alberta. Alberta's municipal districts, most of which are branded as counties, are predominantly rural areas that may include either farmland, Crown land or a combination of both depending on their geographic location. They may also include country residential subdivisions and unincorporated communities, some of which are recognized as hamlets by Alberta Municipal Affairs.

The use of the county term in the official names of 47 municipal districts (and two specialized municipalities) has partially led to a common belief that a county is its own separate municipal status type, which is not the case. The other major contributor to this common belief is that a county was once a former municipal status type in Alberta prior to the County Act being repealed in the mid-1990s. Those municipalities that were once officially incorporated as counties were continued under the Municipal Government Act (MGA) as municipal districts and were permitted to retain the term county in their official names.

More than half of the 64 municipal districts have their main administration offices, including council chambers, in a separate municipality such as a city, town, or village. This municipality (like all other cities, towns, and villages) is not part of the municipal district's jurisdiction. Eleven municipal districts have their offices in a hamlet, which is part of the district's jurisdiction. They are Acadia (Acadia Valley), Bighorn (Exshaw), Birch Hills (Wanham), Clear Hills (Worsley), Cypress (Dunmore), Grande Prairie (Clairmont), Lac La Biche (Lac La Biche), Lac Ste. Anne (Sangudo), Opportunity (Wabasca), and Thorhild (Thorhild). One municipal district, Ranchland, has its offices in a provincial park, Chain Lakes Provincial Park. Thirteen municipal districts have their offices in their jurisdiction, outside the boundaries of a city, town, or village. They are Brazeau (Drayton Valley), Lacombe (between Gull Lake and Lacombe), Mountain View (Didsbury), Newell (Brooks), Northern Sunrise (Peace River), Paintearth (Castor), Parkland (Stony Plain), Peace (Berwyn), Red Deer (Red Deer), Saddle Hills (Spirit River), Wheatland (Strathmore), Willow Creek (Claresholm), and Woodlands (Whitecourt).

The below table is a list of only those rural municipalities in Alberta that are incorporated as municipal districts.

Alberta's eight improvement districts and three special areas are also not listed because they are their own separate type of rural municipality and not subset types of the municipal district status. For more information on special areas, see Special Areas Board.

All content from Kiddle encyclopedia articles (including the article images and facts) can be freely used under Attribution-ShareAlike license, unless stated otherwise. Cite this article:
List of municipal districts in Alberta Facts for Kids. Kiddle Encyclopedia.