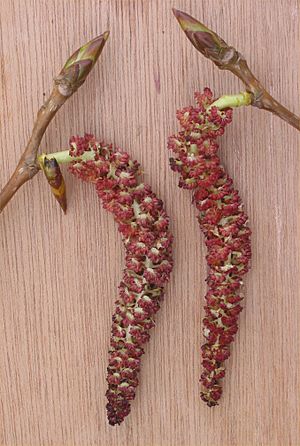 In the September 2006 issue of Science, it was announced that the Western Balsam Poplar (P. trichocarpa) was the first tree to have its full DNA code sequenced.

The flowers are mostly dioecious (rarely monoecious) and appear in early spring before the leaves. They are borne in long, drooping catkins. The male flowers have a group of 4–60 stamens on a disk. The female flower is a single-celled ovary in a cup-shaped disk.

Pollination is by wind. The fruit is a two to four-valved capsule, green to reddish-brown, mature in mid summer. It contains tiny light brown seeds surrounded by tufts of long, soft, white hairs which help wind dispersal.

Poplars of the cottonwood section are often wetlands or riparian trees. The aspens are among the most important boreal broadleaf trees.

Poplars and aspens are important food plants for the larvae of a large number of Lepidoptera species. Pleurotus populinus, the aspen oyster mushroom, is found exclusively on dead wood of Populus trees in North America.

All content from Kiddle encyclopedia articles (including the article images and facts) can be freely used under Attribution-ShareAlike license, unless stated otherwise. Cite this article:
Populus Facts for Kids. Kiddle Encyclopedia.