Populus trichocarpa, the black cottonwood, western balsam-poplar or California poplar, is a deciduous broadleaf tree species native to western North America. It is used for timber, and is notable as a model organism in plant biology.

The bark is grey and covered with lenticels, becoming thick and deeply fissured on old trees. The bark can become hard enough to cause sparks when cut with a chainsaw. The stem is grey in the older parts and light brown in younger parts. The crown is usually roughly conical and quite dense. In large trees, the lower branches droop downwards. Spur shoots are common. The wood has a light coloring and a straight grain.

The leaves are 7–20 cm long with a glossy, dark green upper side and glaucous, light grey-green underside; larger leaves, up to 30 cm long, may be produced on stump sprouts and very vigorous young trees. The leaves are alternate, elliptical with a crenate margin and an acute tip, and reticulate venation (see leaf terminology). The petiole is reddish. The buds are conical, long, narrow, and sticky, with a strong balsam scent in spring when they open.

P. trichocarpa has an extensive and aggressive root system, which can invade and damage drainage systems. Sometimes, the roots can even damage the foundations of buildings by drying out the soil. 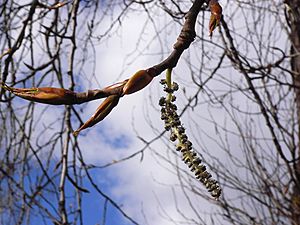 P. trichocarpa is normally dioecious; male and female catkins are borne on separate trees. The species reaches flowering age around 10 years. Flowers may appear in early March to late May in Washington and Oregon, and sometimes as late as mid-June in northern and interior British Columbia, Idaho, and Montana. Staminate catkins contain 30 to 60 stamens, elongated to 2 to 3 cm, and are deciduous. Pistillate catkins at maturity are 8 to 20 cm long with rotund-ovate, tricarpellate subsessile fruits 5 to 8 mm long. Each capsule contains many minute seeds with long, white, cottony hairs.

The seed ripens and is disseminated by late May to late June in Oregon and Washington, but frequently not until mid-July in Idaho and Montana. Abundant seed crops are usually produced every year. Attached to its cotton, the seed is light and buoyant and can be transported long distances by wind and water. The pollen can be an allergen. Although highly viable, longevity of P. trichocarpa seed under natural conditions may be as short as two weeks to a month. This can be increased with cold storage. 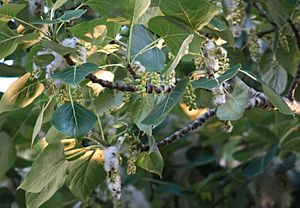 Due to its high levels of rooting hormones, P. trichocarpa sprouts readily. After logging operations, it sometimes regenerates naturally from rooting of partially buried fragments of branches or from stumps. Sprouting from roots also occurs. The species also has the ability to abscise shoots complete with green leaves. These shoots drop to the ground and may root where they fall or may be dispersed by water transport. In some situations, abscission may be one means of colonizing exposed sandbars.

Black cottonwood grows on alluvial sites, riparian habitats, and moist woods on mountain slopes, at elevations of 0–2100(–2750) meters. It often forms extensive stands on bottomlands of major streams and rivers at low elevations along the Pacific Coast, west of the Cascade Range. In eastern Washington and other dry areas, it is restricted to protected valleys and canyon bottoms, along streambanks, and edges of ponds and meadows. It grows on a variety of soils from moist silts, gravels, and sands to rich humus, loams, and occasionally clays. Black cottonwood is a pioneer species that grows best in full sunlight and commonly establishes on recently disturbed alluvium. Seeds are numerous and widely dispersed because of their cottony tufts, enabling the species to colonize even burn sites, if conditions for establishment are met. Seral communities dominated or codominated by cottonwood are maintained by periodic flooding or other types of soil disturbance. Black cottonwood has low drought tolerance; it is flood-tolerant but cannot tolerate brackish water or stagnant pools. 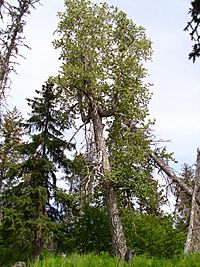 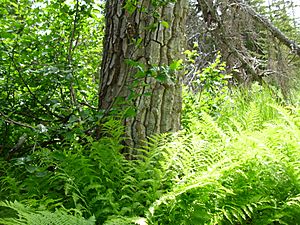 A large specimen in Diamond Ridge, Alaska, and a close-up of the bark at the base of the trunk

The native range of P. trichocarpa covers large sections of western North America. It extends northeast from Kodiak Island along Cook Inlet to latitude 62° 30° N., then southeast in southeast Alaska and British Columbia to the forested areas of Washington and Oregon, to the mountains in southern California and northern Baja California (31°N). It is also found inland, generally on the west side of the Rocky Mountains, in British Columbia, western Alberta, western Montana, and northern Idaho. Scattered small populations have been noted in southeastern Alberta, eastern Montana, western North Dakota, western Wyoming, Utah, and Nevada. It grows up to elevations of 2100 m.

P. trichocarpa has been one of the most successful introductions of trees to the otherwise almost treeless Faroe Islands.

The species was imported from Alaska to Iceland in 1944 and has since become one of the most widespread trees in the country.

It is also grown as an ornamental tree, valued for its fast growth and scented foliage in spring, detectable from over 100 m distance. The roots are however invasive, and it can damage the foundations of buildings on shrinkable clay soils if planted nearby (Mitchel 1996).

Branches can be added to potted plants to stimulate rooting.

Use as a model species

Populus trichocarpa has several qualities that makes it a good model species for trees:

For these reasons, the species has been extensively studied. Its genome sequence was published in 2006 (see "Genome" below). More than 121,000 expressed sequence tags have been sequenced from it. The wide range of topics studied by using P. trichocarpa include the effects of ethylene, lignin biosynthesis, drought tolerance, and wood formation.

P. trichocarpa wood is light-weight and although not particularly strong, is strong for its weight. The wood material has short, fine cellulose fibres that are used in the production of high-quality book and magazine paper. The wood is also excellent for production of plywood. Living trees are used as windbreaks.

This species grows very quickly; trees in plantations in Great Britain have reached 18 m (59 ft) tall in 11 years, and 34 m (112 ft) tall in 28 years. It can reach suitable size for pulp production in 10–15 years and about 25 years for timber production.

Native American tribes in the Pacific Northwest used components of P. trichocarpa for treatments in traditional medicine. Because of its salicin content, it was used raw or in salves to treat various ailments. The wood, roots and bark were used for firewood, canoe making, rope, fish traps, baskets and structures. The gum-like sap was even used as a glue or as waterproofing. Commercial extracts are produced from the fragrant buds for use as a perfume in cosmetics.

The sequence of P. trichocarpa is that of an individual female specimen "Nisqually-1", named after the Nisqually River in Washington in the United States, where the specimen was collected. The sequencing was performed at the Joint Genome Institute using the shotgun method. The depth of the sequencing was about 7.5 x (meaning that each base pair was sequenced on average 7.5 times). Genome annotation was done primarily by the Joint Genome Institute, the Oak Ridge National Laboratory, the Umeå Plant Science Centre, and Genome Canada.

Prior to the publication of P. trichocarpa genome the only available plant genomes were those of thale cress and rice, both of which are herbaceous. P. trihocarpa is the first woody plant genome to be sequenced. Considering the economic importance of wood and wood products, the availability of a tree genome was necessary. The sequence also allows evolutionary comparisons and the elucidation of basic molecular differences between herbaceous and woody plants.

Genome-wide analysis of 11 clumps of P. trichocarpa trees reveals significant genetic differences between the roots and the leaves and branches of the same tree. The variation within a specimen is as much as found between unrelated trees. These results may be important in resolving debate in evolutionary biology regarding somatic mutation (that evolution can occur within individuals, not solely among populations), with a variety of implications.

"Trichocarpa" is Greek for "hairy fruits". These scientific names are now considered synonymous with P. trichocarpa:

All content from Kiddle encyclopedia articles (including the article images and facts) can be freely used under Attribution-ShareAlike license, unless stated otherwise. Cite this article:
Populus trichocarpa Facts for Kids. Kiddle Encyclopedia.