Wyoming is a state in the mountain region of the western United States. Wyoming is bordered on the north by Montana, on the east by South Dakota and Nebraska, on the south by Colorado, on the southwest by Utah, and on the west by Idaho.

Cheyenne is the capital and the most populous city in Wyoming, with a population estimate of 63,335 in 2015.

The western two-thirds of the state is covered mostly with the mountain ranges and rangelands in the Rocky Mountains, while the eastern third of the state is high elevation prairie known as the High Plains. The federal lands include two national parks—Grand Teton and Yellowstone—two national recreation areas and two national monuments, as well as several national forests, historic sites, fish hatcheries, and wildlife refuges.

The Crow, Arapaho, Lakota, and Shoshone were some of the original inhabitants of the region.

Southwestern Wyoming was included in the Spanish Empire and then Mexican territory until it was ceded to the United States in 1848 at the end of the Mexican–American War.

The region acquired the name Wyoming when a bill was introduced to Congress in 1865 to provide a "temporary government for the territory of Wyoming." The territory was named after the Wyoming Valley in Pennsylvania, with the name ultimately being derived from the Munsee word meaning "at the big river flat."

The mineral extraction industry—especially coal, oil, natural gas, and trona—along with the travel and tourism sector are the main drivers behind Wyoming's economy. Agriculture has historically been an important component of the state economy with the main commodities being livestock (beef), hay, sugar beets, grain (wheat and barley), and wool.

The climate is generally semi-arid and continental, being drier and windier in comparison to the rest of the United States, with greater temperature extremes.

As specified in the designating legislation for the Territory of Wyoming, Wyoming's borders are lines of latitude, 41°N and 45°N, and longitude, 104°3'W and 111°3'W (27° W and 34° W of the Washington Meridian), making the shape of the state a latitude-longitude quadrangle. Wyoming is one of only three states (along with Colorado and Utah) to have borders along only straight latitudinal and longitudinal lines, rather than being defined by natural landmarks. Due to surveying inaccuracies during the 19th century, Wyoming's legal border deviates from the true latitude and longitude lines by up to half of a mile (0.8 km) in some spots, especially in the mountainous region along the 45th parallel. Wyoming is bordered on the north by Montana, on the east by South Dakota and Nebraska, on the south by Colorado, on the southwest by Utah, and on the west by Idaho. It is the tenth largest state in the United States in total area, containing 97,814 square miles (253,340 km2) and is made up of 23 counties. From the north border to the south border it is 276 miles (444 km); and from the east to the west border is 365 miles (587 km) at its south end and 342 miles (550 km) at the north end.

The Great Plains meet the Rocky Mountains in Wyoming. The state is a great plateau broken by many mountain ranges. Surface elevations range from the summit of Gannett Peak in the Wind River Mountain Range, at 13,804 feet (4,207 m), to the Belle Fourche River valley in the state's northeast corner, at 3,125 feet (952 m). In the northwest are the Absaroka, Owl Creek, Gros Ventre, Wind River and the Teton ranges. In the north central are the Big Horn Mountains; in the northeast, the Black Hills; and in the southern region the Laramie, Snowy and Sierra Madre ranges.

The Snowy Range in the south central part of the state is an extension of the Colorado Rockies in both geology and appearance. The Wind River Range in the west central part of the state is remote and includes more than 40 mountain peaks in excess of 13,000 ft (4,000 m) tall in addition to Gannett Peak, the highest peak in the state. The Big Horn Mountains in the north central portion are somewhat isolated from the bulk of the Rocky Mountains.

The Teton Range in the northwest extends for 50 miles (80 km), part of which is included in Grand Teton National Park. The park includes the Grand Teton, the second highest peak in the state.

The Continental Divide spans north-south across the central portion of the state. Rivers east of the divide drain into the Missouri River Basin and eventually the Gulf of Mexico. They are the North Platte, Wind, Big Horn and the Yellowstone rivers. The Snake River in northwest Wyoming eventually drains into the Columbia River and the Pacific Ocean, as does the Green River through the Colorado River Basin.

The Continental Divide forks in the south central part of the state in an area known as the Great Divide Basin where the waters that flow or precipitate into this area remain there and cannot flow to any ocean. Instead, because of the overall aridity of Wyoming, water in the Great Divide Basin simply sinks into the soil or evaporates.

Several rivers begin in or flow through the state, including the Yellowstone River, Bighorn River, Green River, and the Snake River.

Wyoming has 32 named islands, of which the majority are located in Jackson Lake and Yellowstone Lake within Yellowstone National Park in the northwest portion of the state. The Green River in the southwest also contains a number of islands. 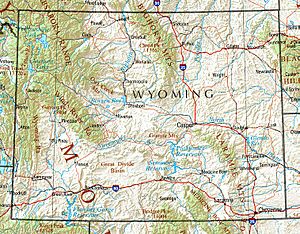 The vast majority of this government land is administered by the Bureau of Land Management and U.S. Forest Service in numerous national forests, a national grassland, and a number of vast swathes of public land, in addition to the Francis E. Warren Air Force Base in Cheyenne.

In addition, Wyoming contains areas managed by the National Park Service and other agencies such as the U.S. Fish and Wildlife Service, including: 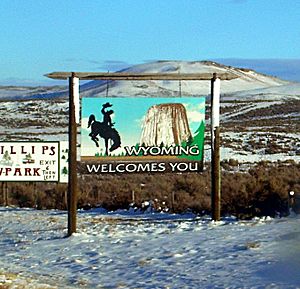 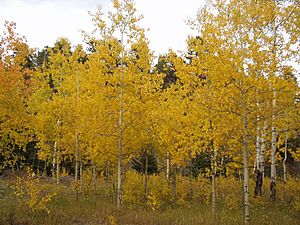 Autumn in the Bighorn Mountains

Wyoming's climate is generally semi-arid and continental, and is drier and windier in comparison to most of the United States with greater temperature extremes. Much of this is due to the topography of the state.

Winters are cold, but are variable with periods of sometimes extreme cold interspersed between generally mild periods, with Chinook winds providing unusually warm temperatures in some locations.

Wyoming is a dry state with much of the land receiving less than 10 inches (250 mm) of rainfall per year.

The southeastern corner of the state is the most vulnerable part of the state to tornado activity. Moving away from that point and westwards, the incidence of tornadoes drops dramatically with the west part of the state showing little vulnerability. Tornadoes, where they occur, tend to be small and brief, unlike some of those that occur a little farther east. 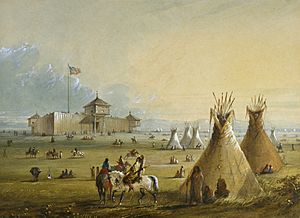 Several Native American groups originally inhabited the region now known as Wyoming. The Crow, Arapaho, Lakota, and Shoshone were but a few of the original inhabitants encountered when white explorers first entered the region. What is now southwestern Wyoming became a part of the Spanish Empire and later Mexican territory of Alta California, until it was ceded to the United States in 1848 at the end of the Mexican–American War. French-Canadian trappers from Québec and Montréal went into the state in the late 18th century, leaving French toponyms such as Téton, La Ramie, etc. John Colter, a member of the Lewis and Clark Expedition, itself guided by French Canadian Toussaint Charbonneau and his young Shoshone wife, Sacagawea, first described the region in 1807. At the time, his reports of the Yellowstone area were considered to be fictional. Robert Stuart and a party of five men returning from Astoria discovered South Pass in 1812. The Oregon Trail later followed that route. In 1850, Jim Bridger located what is now known as Bridger Pass, which the Union Pacific Railroad used in 1868—as did Interstate 80, 90 years later. Bridger also explored Yellowstone and filed reports on the region that, like those of Colter, were largely regarded as tall tales at the time.

The region had acquired the name Wyoming by 1865, when Representative James Mitchell Ashley of Ohio introduced a bill to Congress to provide a "temporary government for the territory of Wyoming". The territory was named after the Wyoming Valley in Pennsylvania, made famous by the 1809 poem Gertrude of Wyoming by Thomas Campbell, based on the Battle of Wyoming in the American Revolutionary War. The name ultimately derives from the Munsee word xwé:wamənk, meaning "at the big river flat." 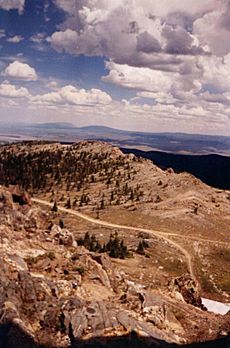 After the Union Pacific Railroad had reached the town of Cheyenne in 1867, the region's population began to grow steadily, and the federal government established the Wyoming Territory on July 25, 1868. Unlike mineral-rich Colorado, Wyoming lacked significant deposits of gold and silver, as well as Colorado's subsequent population boom. However, South Pass City did experience a short-lived boom after the Carissa Mine began producing gold in 1867. Furthermore, copper was mined in some areas between the Sierra Madre Mountains and the Snowy Range near Grand Encampment.

On December 10, 1869, territorial Governor John Allen Campbell extended the right to vote to women, making Wyoming the first territory and then United States state to grant suffrage to women. In addition, Wyoming was also a pioneer in welcoming women into politics. Women first served on juries in Wyoming (Laramie in 1870); Wyoming had the first female court bailiff (Mary Atkinson, Laramie, in 1870); and the first female justice of the peace in the country (Esther Hobart Morris, South Pass City, in 1870). Also, in 1924, Wyoming became the first state to elect a female governor, Nellie Tayloe Ross, who took office in January 1925. Due to its civil-rights history, one of Wyoming's state nicknames is "The Equality State", and the official state motto is "Equal Rights".

Wyoming's constitution included women's suffrage and a pioneering article on water rights. Congress admitted Wyoming into the Union as the 44th state on July 10, 1890. 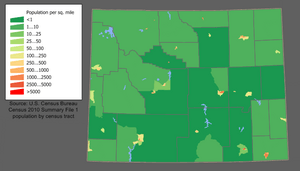 The center of population of Wyoming is located in Natrona County.

In 2014, the United States Census Bureau estimated that the racial composition of the population was 92.7% White American (82.9 non-Hispanic white), 2.7% American Indian and Alaska Native, 1.6% Black or African American, 1.0% Asian American, and 0.1% Native Hawaiian or Pacific Islander. 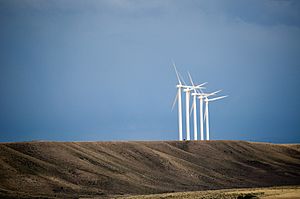 The mineral extraction industry and travel and tourism sector are the main drivers behind Wyoming's economy.

Historically, agriculture has been an important component of Wyoming's economy. The main agricultural commodities produced in Wyoming include livestock (beef), hay, sugar beets, grain (wheat and barley), and wool. More than 91% of land in Wyoming is classified as rural. 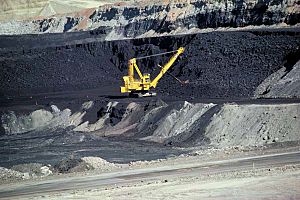 A Wyoming coal mine 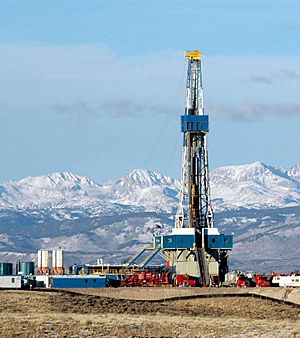 A drilling rig drills for natural gas just west of the Wind River Range in the Wyoming Rockies. 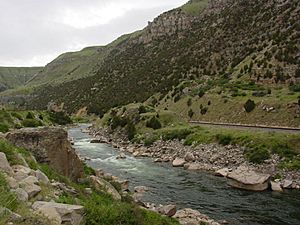 Today the Wind River Indian Reservation is jointly owned, with each tribe having a 50% interest in the land, water, and other natural resources. The reservation is a sovereign, self-governed land with two independent governing bodies: the Eastern Shoshone Tribal Government and the Northern Arapaho Tribal Government. The Eastern Shoshone Business Council meets jointly with the Northern Arapaho Business Council as the Joint Business Council to decide matters that affect both tribes. Six elected council members from each tribe serve on the joint council.

The state of Wyoming has 23 counties. 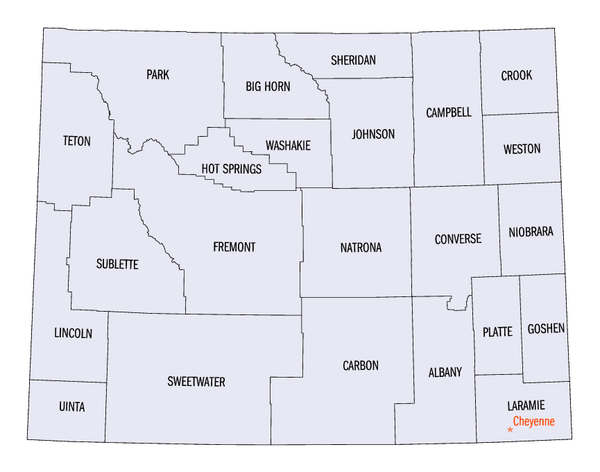 An enlargeable map of the 23 counties of Wyoming

Wyoming license plates contain a number on the left that indicates the county where the vehicle is registered, ranked by an earlier census. Specifically, the numbers are representative of the property values of the counties in 1930. The county license plate numbers are as follows: 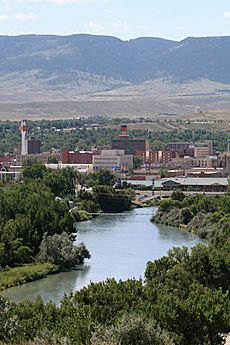 The State of Wyoming has 99 incorporated municipalities.

In 2005, 50.6% of Wyomingites lived in one of the 13 most populous Wyoming municipalities. 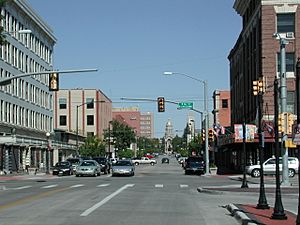 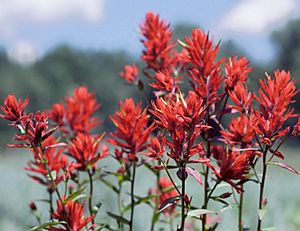 All content from Kiddle encyclopedia articles (including the article images and facts) can be freely used under Attribution-ShareAlike license, unless stated otherwise. Cite this article:
Wyoming Facts for Kids. Kiddle Encyclopedia.