Kids Encyclopedia Facts
This page is about the valley region in Pennsylvania. For other uses, see Wyoming Valley (disambiguation).

The valley is a crescent-shaped depression, a part of the ridge-and-valley or folded Appalachians. The Susquehanna River occupies the southern part of the valley, which is notable for its deposits of anthracite. These have been extensively mined. Deep mining of anthracite has declined throughout the greater Coal Region, however, due to the greater economics of strip mining. Parts of the local mines had already shut down because some coal beds were on fire and had to be sealed; but the exodus of mining companies came quickly following the legal and political repercussions of the 1959 Knox Mine Disaster—when the roof of the Knox Coal Company's mine under the river collapsed. The Pocono Mountains, a ridgeline away, are often visible from higher elevations to the east and to the southeast of the Wyoming Valley.

The Scranton–Wilkes-Barre–Hazleton, PA Metropolitan Statistical Area covers Lackawanna, Luzerne, and Wyoming counties. It had a combined population of 558,166 in 2015. The counties adjacent to the "Wyoming Valley" include Monroe County (Southeast), Susquehanna County (Northeast), Wayne County (East), Columbia County (West), Bradford County (Northwest), Carbon County (South), Sullivan County (West) and Schuylkill County (Southeast). The area also has the highest percentage of non-Hispanic whites of any U.S. metropolitan area with a population over 500,000, with 96.2% of the population stating their race as white alone and not claiming Hispanic ethnicity.

Yellow: the largest county by area and population 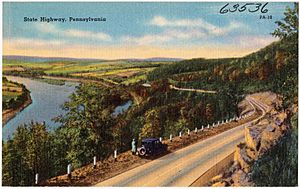 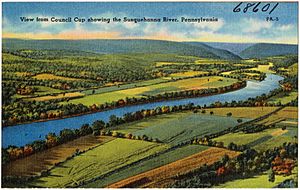 View of the Susquehanna River

The name Wyoming derives from the Lenape Munsee name xwé:wamənk, meaning "at the smaller river hills."

According to the Jesuit Relation of 1635, the Wyoming Valley was inhabited by the Scahentoarrhonon people, an Iroquoian-speaking group; it was then known as the Scahentowanen Valley. By 1744 it was inhabited by Lenape, Mahican, Shawnee and others who had been pushed out of eastern areas by the Iroquois Confederacy. From the 1740s to the 1760s, the valley was the site of Moravian mission work among the Native Americans living there. They envisioned a settlement for Christian Indians. But the violence of the French and Indian War, the North American front of the Seven Years' War, drove these settlers away with David Zeisberger, the Moravian "Apostle to the Indians."

Pennsylvania's and Connecticut's conflicting claims to the territory — King Charles II of England had granted the land to the colony of Connecticut in 1662, and also to William Penn in 1681 — led to military skirmishes known as the Pennamite Wars. After Yankee settlers from Connecticut founded the town of Wilkes-Barre in 1769, armed bands of Pennsylvanians (Pennamites) tried without success to expel them in 1769-70, and again in 1775.

During the American Revolutionary War, the Battle of Wyoming took place here on July 3, 1778, in which more than 300 Revolutionaries died at the hands of Loyalists and their Iroquois allies. The incident was depicted by the Scottish poet Thomas Campbell in his 1809 poem Gertrude of Wyoming. At the time, rebel colonists widely believed that Joseph Brant, a Mohawk chief, had led the Iroquois forces; in the poem, Brant is described as the "Monster Brant" because of the atrocities committed. Later colonists determined that Brant had not been present at this conflict. The popularity of the poem may have led to the state of Wyoming later being named after the valley.

Local attractions include the Mohegan Sun Arena at Casey Plaza in Wilkes-Barre, the Pocono Raceway in Long Pond, PNC Field in Moosic, Mohegan Sun at Pocono Downs in Plains, the Toyota Pavilion in Scranton, the Wyoming Valley Mall in Wilkes-Barre, the Shoppes at Montage in Moosic, the Steamtown Mall in Scranton, the Viewmont Mall in Scranton/Dickson City, Pennsylvania, and the Montage Mountain Waterpark/Ski Resort in Scranton. Other historic attractions include Eckley Miners' Village and the Steamtown National Historic Site.

The airports for this area are Wilkes-Barre/Scranton International Airport and the Wilkes-Barre Wyoming Valley Airport.

All content from Kiddle encyclopedia articles (including the article images and facts) can be freely used under Attribution-ShareAlike license, unless stated otherwise. Cite this article:
Wyoming Valley Facts for Kids. Kiddle Encyclopedia.