Wayne is a sixth-class county in Pennsylvania. The county's population was 52,822 at the time of the 2010 United States Census. The county seat is the Borough of Honesdale. The county was formed from part of Northampton County on March 21, 1798, and was named for the Revolutionary War General Anthony Wayne.

The terrain of the county is varied. In the wider northern half, the land is rugged along its border with New York State, while the southern portion tends to be swampier. Higher hills and mountains are predominantly found along the county's western edge, while lower ones are more common in the east, near the Delaware River. The middle section of Wayne County is a wide plain.

The highest elevation in the county, 2,659 ft (810 m), is the summit of Mount Ararat in Orson. Two other summits at the north end of the same ridge also exceed 2,640 ft (800 m) in elevation. The county's lowest point, at approximately 680 ft (210 m) above sea level, is along the Delaware, near Wayne County's border with Pike County, Pennsylvania.

Most of Wayne County is drained by the Delaware (which separates Pennsylvania from New York), with the exception of a few small areas in the western part of the county, which are drained by either the Starrucca Creek or the Lackawanna River (which both eventually flow into the Susquehanna River).

67.6% of Wayne County's households were families, 53.9% were headed by a heterosexual married couple (Pennsylvania did not allow same-sex marriage until May 20, 2014, after the 2010 Census had been completed), and 26.6% included children under the age of 18. 9.2% of households were headed by a female householder with no husband present, 4.5% by a male householder with no wife present, and 32.4% consisted of non-families. 27.2% of all households were made up of individuals, and 12.3% consisted of a person 65 years of age or older living alone. The average household size was 2.38 and the average family size was 2.87. 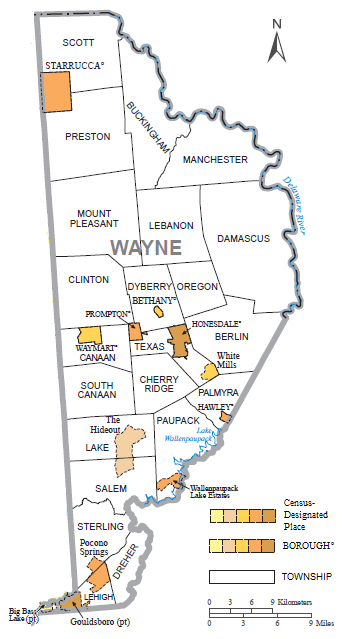 Map of Wayne County with municipalities and CDPs labeled.

Under Pennsylvania law, there are four types of incorporated municipalities: boroughs, cities, townships, and one town. Wayne County has only boroughs and townships. The latter type is classified based on population by the state government; all of its townships are second-class. A complete list of the county's municipalities follows:

In addition, Pennsylvania also has a few types of unincorporated communities, namely villages and private communities. Villages are unincorporated communities within a township, often defined by ZIP code boundaries, property deeds, and local consensus, but which have no official boundaries or population, unless they are also census-designated places (CDPs), geographical areas designated by the US Census Bureau for the purposes of compiling demographic data. Regardless of whether or not they are CDPs, however, they are not actual jurisdictions under Pennsylvania law. Private communities are gated settlements usually governed by a community association, which also often defines the boundaries of the community and may keep track of the number of its members. However, like villages, private communities have no official boundaries or populations, unless they are CDPs, and are never Pennsylvanian jurisdictions. The following is an incomplete list by necessity, but more complete lists of Wayne County's villages and private communities may be found in the corresponding township entry.

The population ranking of the following table is based on the 2010 census of Wayne County.

All content from Kiddle encyclopedia articles (including the article images and facts) can be freely used under Attribution-ShareAlike license, unless stated otherwise. Cite this article:
Wayne County, Pennsylvania Facts for Kids. Kiddle Encyclopedia.