Orson is a village in Preston Township, Wayne County, Pennsylvania, in the Lake Region of the Poconos. It was once an important depot of the Scranton Division of the New York, Ontario & Western (O&W) Railway, but today, when it is known outside of its immediate vicinity, it is largely for being the site of the intersection of two state roads, Belmont Turnpike (partially concurrent with Pennsylvania Route 670, or PA-670) and Crosstown Highway (entirely concurrent with PA-370), or as the location of Independent Lake Camp (ILC), since ILC's reputation and commercial reach, like those of most rural American summer camps, extend beyond the community in which the camp is physically located. 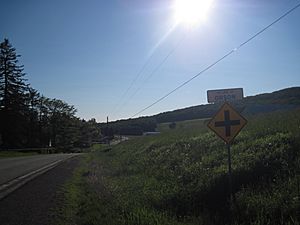 One of Orson's PennDOT signs, located on Crosstown Highway to the east of the intersection with Belmont Turnpike.

Two Pennsylvania Department of Transportation (PennDOT) signs on Crosstown Highway identify the community as the "Village of Orson." In Pennsylvania, a village is an unincorporated community within a township, but PennDOT identifies most villages with roadside signs, a fact that might reasonably lead those unfamiliar with this practice to believe that these communities are incorporated municipalities administered separately from the townships in which they are located. Since Pennsylvania's villages, including Orson, are, in fact, not municipalities in their own right, they do not have official boundaries, and the United States Census Bureau does not collect statistics for them (unless, unlike Orson, they are census-designated places). In spite of this, because of strong local consensus, as well as the fact that many features are named for the villages they are associated with, it is almost always possible to consistently determine whether a particular feature is in one village or another. 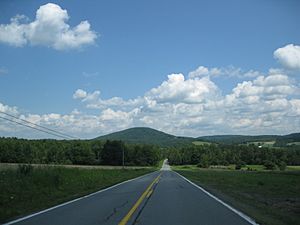 Sugarloaf Mountain, center-left, as seen from East Ararat on Crosstown Highway between Orson and PA-171, facing northeast. The NEP cell tower and a few buildings that are part of ILC can also be seen in the distance, center-right. 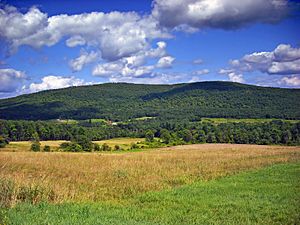 Mount Ararat, as seen from approximately the same spot, but facing southeast.

Notable natural features located in Orson include Mount Ararat (partially in Belmont Corners, Pennsylvania, and sometimes called Ararat Mountain, Ararat Peak, Ararat Summit, or simply "Ararat"), Independent Lake (partially in Poyntelle, Pennsylvania, and formerly known as Independence Pond or Independent Pond, and sometimes known today as Lake Independence or Lake Independent), Mud Pond (partially in East Ararat, Pennsylvania), Orson Pond, and Sugarloaf Mountain (formerly called Sugar Loaf Peak or Sugar-loaf Mountain). In addition, some of the small, unnamed streams that are the source of the West Branch of the Lackawaxen River begin in the southern part of the village (the rest are in Poyntelle).

Independent Lake is one of the four sources of the East Branch of the Lackawanna River (the other three being Bone Pond, or Summit Lake, and Lake Lorain, or Five Mile Pond, in Poyntelle; and Dunn Pond, or Dunns Lake, in East Ararat). It is fed by natural springs on the lake bottom. Orson Pond, a reservoir once used for ice harvesting and other economic activities, was originally a much smaller body of water, but was expanded significantly when the Orson Pond Dam, or Orson Dam, (which is of the rock-fill variety) was built. The pond drains into the Lackawanna.

As has been noted above, Orson is centered around the intersection of Belmont Turnpike and Crosstown Highway. This intersection is the northern terminus of both Belmont and PA-670 (which are concurrent there), and the paved road that runs north from the junction is called Oxbow Road (at least one source says "Orson" Road and is part of neither PA-670 nor Belmont.

The community known today as Orson was founded by Merritt Hine (at least one source says "Merrill" Hine) of Woodbridge, Connecticut, in 1840 (one source says he was from Massachusetts and that he founded the village in 1831). He was the son of David Hine, who relocated to Pennsylvania sometime after his son was established there. Like many of the early settlers of Wayne County, the elder Hine was a veteran of the Revolutionary War, having served in the Continental Army. In its early days, the settlement was known as Hine's Corners, and was situated around what is now the intersection of Clark and Oxbow Roads. "Hines Corners" (note that the apostrophe is dropped) is still the accepted name for the intersection of Clark and Oxbow, and it is labeled as such on the United States Geological Survey (USGS) topographic quadrangle map which includes Orson (the quadrangle also being called "Orson").

Hine's Corners quickly grew to a reasonable size and appears in F. W. Beers' 1872 Atlas of Wayne County. The population subsisted in large part on agriculture, dairying, and ice harvesting, the last of which was facilitated by the large number of lakes in the area. The Hine's Corners United Methodist Congregation was formed in 1849 after the conversion of Catharine Hine (née Belcher), wife of Merritt Hine, and the Hine's Corners Methodist Episcopal (ME) Church (later the Orson ME Church

On December 25, 1878, Orson C. Chamberlain, a great-grandchild of Catharine and Merritt Hine, died of diphtheria in an epidemic that affected many people in the area. The community came to be known as Orson Corners (virtually always shortened to Orson) in his honor, and the post office was accordingly renamed "Orson Post Office" on September 19, 1896.

When the O&W Railway expanded its service to Scranton, Pennsylvania, in 1890, it created several depots in rural Wayne County, one of which was located in Orson. The station was listed on maps and timetables as both "Orson" and as "Belmont," the latter being a variant name for Belmont Corners. The Orson/Belmont depot, which had the call letters "BM," was located a few yards south of what is now the intersection of Belmont Turnpike and Crosstown Highway, and its construction caused the community to move slightly southwards in order to take advantage of the economic opportunities brought by the new railroad. The rail traffic brought great prosperity to Orson, and at the height of the railroad's popularity, the village boasted two creameries, two ice houses, a grain mill, a sawmill, and several hotels and stores, created in large part to serve the influx of people brought to and through Orson by the O&W.

The depot building burned down on March 24, 1933. The O&W did not rebuild it (although it continued to use the stop for freight operations) and got permission on June 5, 1939, from the Pennsylvania Public Utility Commission to convert it to an unstaffed station. It was finally abandoned in 1957 after the O&W went bankrupt, and this event largely marked the end of Orson's notability outside of its contiguity. Many of the village's business establishments closed soon after the railroad did, with the notable exception of the summer camps that would gradually come to replace the railroad as Orson's main source of supra-regional prominence. The first of these was Camp Nehantic, a Jewish girls’ camp twin Jewish camps for girls and boys, respectively. These two had both opened around 1928 on the banks of Lake Champlain in Milton, Vermont (at least one source says they were located in Oneonta, New York, and refers to the boys' camp as "Keeyuma"). The two camps shared facilities and operated in concert with each other until 1949, when they were consolidated into one coeducational, Jewish camp that seems to have been administratively distinct from them, but was nevertheless also called Camp Keeyumah. This Keeyumah was open until 1974.

Meanwhile, the eastern bank of the lake, in Poyntelle, had long been occupied by Camp Echo Lark. It had originally been associated with French Woods Festival of the Performing Arts, a still-operating performing arts-oriented camp in Hancock, New York.

In 1981, after the western bank had been vacant for seven years, a new camp, called Camp Westmont, took over the property. This situation continued until 1992, when Westmont and New England Experience switched places, with Westmont moving to the lake’s eastern bank in Poyntelle, where it remains today, and New England Experience relocating to the western bank in Orson. In addition, New England Experience changed its name to NE2 at Independent Lake, By 1995, the latter moniker had fully replaced the former, a phenomenon which had the effect of obscuring the link between ILC and the original Connecticut camp for those who began attending or working there after the name change.

On September 13, 2001, the owners of ILC purchased land on a nameless hill to the south of the lakefront. This new area was dubbed "Elkview," after Elk Hill (often called Elk Mountain) in Tirzah, Pennsylvania, which is visible from the top of the nameless hill, while the original land that had been part of the previous camps became known as "Lakeside," after Independent Lake. 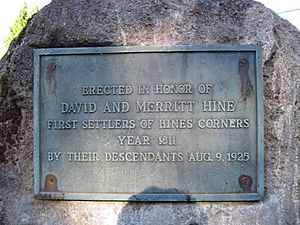 The plaque commemorating the village's founding, located at Hines Corners.

Orson Cemetery, which was originally called Hine's Corners Cemetery, is located on Oxbow Road between Clark and Crosstown Highway.

There are also three cell towers in the village, the first of which is owned by the North-Eastern Pennsylvania Telephone Company (NEP) maintained by the Rails-to-Trails Conservancy, runs through Orson.

At Hines Corners, there is a plaque commemorating the founding of the original Village of Hine's Corners by David and Merritt Hine. The plaque was placed there on August 9, 1925, by descendants of the Hine family. Interestingly, it states that the Hines founded the community in 1811, while historical sources (all of which were published before the erection of the plaque) put the founding date at either 1831 or 1840 instead. However, these sources also offer a possible solution: both note that the younger Hine came from Connecticut (or Massachusetts) in 1811 (or 1810), and say that he came first to the nearby Village of Ararat in Ararat Township, Susquehanna County, Pennsylvania. It is possible that family lore may have diverged from the truth in the intervening century between Hine's Corners' founding and the plaque's erection.

The previously mentioned Orson Post Office is in the basement of a home on Belmont Turnpike, just under a mile south of the intersection of Belmont and Crosstown. While it is technically still open, it was placed under emergency suspension and no longer provides postal services.

The last entity to use Orson's ZIP code, 18449 (which retains legal status because the post office has not been officially discontinued), in its mailing address was Orson Corners Veterinary Clinic, and all mailing addresses within the village now employ 18439, 18465, or 18470 (the ZIP codes of Lakewood, Pennsylvania; Thompson, Pennsylvania; and Union Dale, Pennsylvania, respectively). While discrepancies between physical and mailing addresses are not uncommon in sparsely-populated rural areas, where the number of locally recognized communities routinely exceeds the number of post offices, in most cases a community with a discontinued or suspended post office tends to be absorbed into a single ZIP code (e.g., Panther, Pennsylvania). Since Orson now straddles three ZIP codes, some people without a relatively high degree of familiarity with the area may mistakenly think that a given feature is actually in one of the three communities those ZIP codes primarily represent. This is especially problematic given that two of those communities, Union Dale and Thompson, are incorporated municipalities (and therefore have clearly defined borders), and are not even in the same county as Orson. However, at least in theory, it would still be appropriate to give the physical addresses of places in Orson using "Orson, PA 18449," regardless of what ZIP code these places use in their mailing addresses.

All content from Kiddle encyclopedia articles (including the article images and facts) can be freely used under Attribution-ShareAlike license, unless stated otherwise. Cite this article:
Orson, Pennsylvania Facts for Kids. Kiddle Encyclopedia.