Poyntelle (/pɔɪˈnɛl/ poy-NEL) is a village in Preston Township, Wayne County, Pennsylvania, in the Lake Region of the Poconos. It was once a depot of the Scranton Division of the New York, Ontario & Western (O&W) Railway, but today, when it is known outside of its immediate vicinity, it is largely for being the location of Camps Westmont and Poyntelle Lewis Village, since the reputation and commercial reach of both, like those of most rural American summer camps, extend beyond the community in which the camps are physically located. 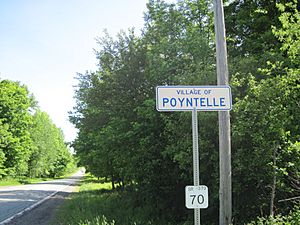 An image of one of Poyntelle's two PennDOT signs, this one facing northeast along Crosstown Highway.

Two Pennsylvania Department of Transportation (PennDOT) signs on Crosstown Highway identify the community as the "Village of Poyntelle." In Pennsylvania, a village is an unincorporated community within a township, but PennDOT identifies most villages with roadside signs, a fact that might reasonably lead those unfamiliar with this practice to believe that these communities are incorporated municipalities administered separately from the townships in which they are located. Since Pennsylvania's villages, including Poyntelle, are, in fact, not municipalities in their own right, they do not have official boundaries, and the United States Census Bureau does not collect statistics for them (unless, unlike Poyntelle, they are census-designated places). In spite of this, because of strong local consensus, as well as the fact that many features are named for the villages they are associated with, it is almost always possible to consistently determine whether a particular feature is in one village or another.

Notable natural features located in Poyntelle include Bone Pond (also called Summit Lake ), Independent Lake (partially in Orson, Pennsylvania, and formerly known as Independence Pond or Independent Pond, and sometimes known today as Lake Independence or Lake Independent), Lake Lorain (also called Five Mile Pond), and Poyntelle Lake (also called Pointed Pond).In addition, the Equinunk, Riley, and Johnson Creeks run through Poyntelle, and some of the small, unnamed streams that are the source of the West Branch of the Lackawaxen River begin in the southern part of the village (the rest are in Orson).

Independent Lake, Bone Pond, and Lake Lorain are three of the four sources of the East Branch of the Lackawanna River (the fourth being Dunn Pond, or Dunns Lake, in East Ararat, Pennsylvania). Lake Lorain has the highest elevation of any lake in Wayne County, hence the alternate name "Summit Lake." Poyntelle Lake feeds into the Equinunk. Like most of the lakes in Preston Township, all of Poyntelle's are fed by natural springs on their lake bottoms.

Poyntelle is located along Crosstown Highway, which is entirely concurrent with PA-370 (PA-370). Besides Crosstown, there are two other state routes in the village, Cribbs Road (PA-4031), which connects to Crosstown, and South Preston Road (PA-4033). All three of these are paved.

All content from Kiddle encyclopedia articles (including the article images and facts) can be freely used under Attribution-ShareAlike license, unless stated otherwise. Cite this article:
Poyntelle, Pennsylvania Facts for Kids. Kiddle Encyclopedia.