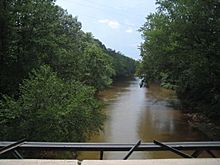 The lower reaches of the river flow through the urban areas of Scranton, which grew around its banks in the 19th century as an industrial center. Its name comes from a Lenni Lenape word meaning "stream that forks".

All content from Kiddle encyclopedia articles (including the article images and facts) can be freely used under Attribution-ShareAlike license, unless stated otherwise. Cite this article:
Lackawanna River Facts for Kids. Kiddle Encyclopedia.