Lackawanna County is a county in the U.S. state of Pennsylvania. As of the 2010 census, the population was 214,437. Its county seat and largest city is Scranton.

The county was created on August 13, 1878, following decades of trying to gain its independence from Luzerne County. (The courts were organized in October 1878.) It is Pennsylvania's last county to be created. It is named for the Lackawanna River.

Lackawanna County is included in the Scranton–Wilkes-Barre–Hazleton, PA Metropolitan Statistical Area ("Wyoming Valley"). It is the second largest County within the metropolitan area. It lies northwest of the Pocono Mountains. Lackawanna County is located approximately 40 miles from the New Jersey border in Montague, New Jersey and also located approximately 33 miles from upstate New York in Windsor, New York.

Lackawanna County is a region that was developed for iron production and anthracite coal mining in the nineteenth century, with its peak of coal production reached in the mid-20th century. Scranton, then still part of Luzerne County, became a center of mining and industry. It was the site of the Lackawanna Iron and Coal Company, which later began to produce steel using the Bessemer process. In 1877 at the time of the Scranton General Strike, the company was managed by William Walker Scranton, whose father had been president until his death in 1872. Two of his cousins had been founders of the company and the city.

Act 13 of 2012, which levied a Marcellus Shale Impact Fee, was signed into law by Governor Tom Corbett on February 14, 2012. The bill provides for the imposition of an unconventional well fee by county (or alternatively municipalities compelling the imposition of an unconventional well fee). A county may impose the fee if unconventional gas wells are located within its borders and it passes an ordinance within 60 days of the effective date of Act 13. A county that did not pass an ordinance imposing a fee is prohibited from receiving funds. This prohibition remains in effect until a county passes an ordinance imposing a fee. In 2014, Lacakawanna County received an impact fee disbursement of $205,082.23 even though there are no wells in the County. The top county recipient was Washington County which received $6,512,570.65 in 2014. 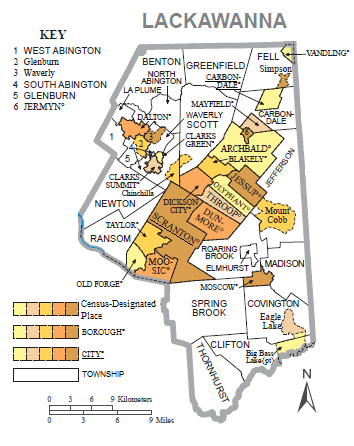 Map of Lackawanna County with municipalities and CDPs labeled. 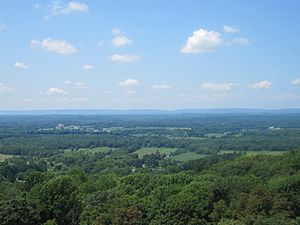 Under Pennsylvania law, there are four types of incorporated municipalities: cities, boroughs, townships, and one town. The following cities, boroughs and townships are located in Lackawanna County:

The population ranking of the following table is based on the 2010 census of Lackawanna County.

All content from Kiddle encyclopedia articles (including the article images and facts) can be freely used under Attribution-ShareAlike license, unless stated otherwise. Cite this article:
Lackawanna County, Pennsylvania Facts for Kids. Kiddle Encyclopedia.