Clarks Summit is a borough in Lackawanna County northwest of Scranton in northeastern Pennsylvania, United States. The population was 5,116 at the 2010 census. It is also the northern terminus of the Pennsylvania Turnpike Northeast Extension, I-476.

The first settler in the area currently known as Clarks Summit was William Clark. Clark had fought in the Battle of Bunker Hill during the Revolutionary War, and as payment for his military service, he was issued 800 acres (3.2 km2) of Pennsylvania land by Congress. Because of disputes between Pennsylvania and Connecticut over the area of land that is now northern Pennsylvania, the land deed issued to Clark was deemed invalid by the Luzerne County land grant office. Clark had no choice but to pay for the land himself. In March 1799, Clark and his three sons moved into a log cabin in the Abington wilderness, located on what is currently the Clarks Green Cemetery. The first school was built in 1893 and was destroyed by fire two years later. The village of Clarks Summit and an adjacent tract of land were incorporated into the Borough of Clarks Summit on August 30, 1911.

According to the United States Census Bureau, the borough has a total area of 1.6 square miles (4.1 km2), all of it land.

There are many geological features that add appeal to the area of Clarks Summit. Many of the locals enjoy the plethora of natural lands and features during the warmer months. Clarks Summit area has four dams (Cobbs Lake Dam, Fords Lake Dam, Interlaken Dam, and Summit Lake Dam) that all have scenic bodies of water attached for many outdoor activities such as fishing and swimming. Moreover, Cummings Pond, Gravel Pond, and Lance Pond additionally offer many outdoor opportunities for residents and their families. Along with these lakes, ponds, and dams, there are also several reservoirs that are contained in the area. The area's four reservoirs serve as local hot spots for summer swimming and rope swings for much of Clarks Summit's youth. In addition to bodies of water, the area also services many hiking and walking locations throughout the borough. The area is home to Bald Mountain, Captain White Hill, Griffin Hill, Pinnacle Rock, West Mountain, Wilbur Hill, Summit Pointe, Waverly Community walking trail and many others. Residents get to enjoy the multitude of natural land opportunities that range from beginner to more advanced experiences. Much of the area within Clarks Summit is rural which adds to the experience for nature lovers. 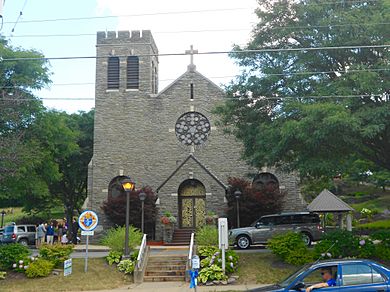 Our Lady of the Snows Parish

The oldest standing house is the former Snook family house, built in 1837 and located on West Grove Street.

All content from Kiddle encyclopedia articles (including the article images and facts) can be freely used under Attribution-ShareAlike license, unless stated otherwise. Cite this article:
Clarks Summit, Pennsylvania Facts for Kids. Kiddle Encyclopedia.