Kids Encyclopedia Facts
"Northeast Pennsylvania" redirects here. It is not to be confused with North East, Pennsylvania.

Northeastern Pennsylvania (NEPA) is a geographic region of the U.S. state of Pennsylvania that includes the Pocono Mountains, the Endless Mountains, and the industrial cities of Scranton, Wilkes-Barre, Pittston, Hazleton, Nanticoke, and Carbondale. A portion of this region constitutes a part of the New York City metropolitan area.

Unlike some other parts of the Rust Belt, some of these communities are experiencing a modest population increase. Some parts of the region, specifically Monroe and Pike counties, rank among the fastest growing areas of the state.

The region overlaps with the Pocono Mountains, the Endless Mountains, the Wyoming Valley, the Coal Region, Pennsylvania Dutch Country, and, by some definitions, the Lehigh Valley.

Green: the largest county by area; Yellow: the most populous county 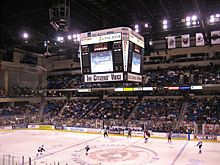 Hotel of the Mohegan Sun Casino

Northeastern Pennsylvania is home to several attractions. PNC Field in Moosic hosts the Scranton/Wilkes-Barre RailRiders, the AAA affiliate to Major League Baseball's New York Yankees. Mohegan Sun Arena at Casey Plaza in Wilkes-Barre hosts the American Hockey League's Wilkes-Barre/Scranton Penguins and previously hosted the Wilkes-Barre/Scranton Pioneers of Af2 arena football. Pocono Raceway in Long Pond holds two NASCAR races annually. Mohegan Sun at Pocono Downs in Plains was Pennsylvania's first casino. Mount Airy Casino Resort in Mount Pocono also offers gambling. Skiers can find several slopes in the area, including Blue Mountain Ski Resort, east of Palmerton, Montage Mountain Ski Resort in Scranton and Camelback Ski Area in Tannersville. Camelbeach Waterpark, an outdoor water park, is located in Tannersville. There are also several attractions that explore the region's industrial history. Eckley Miners' Village near Hazleton and the Lackawanna Coal Mine Tour in Scranton highlight coal mining history, while Steamtown National Historic Site and the Electric City Trolley Museum, both in Scranton, focus on transportation history. The Houdini Museum in Scranton follows Houdini's exploits in the area, as well as the rest of the world, and is the only building in the world dedicated to the legendary escape artist. The Scranton Ghost Walk attraction tells of Scranton's paranormal history. 1433 N. Main Avenue home of the longest running seance event in the United States, called "Haunted! Mysteries of THE Beyond!" was picked by the Pennsylvania Department of tourism as one of the most haunted places in the state.

The Philharmonic presents two performances of each of their concerts- one in Scranton and one in Wilkes-Barre. Their concert series include classical and pop-themed performance programs, Independence Day concerts are offered free of charge to the community, and holiday performances incorporating local choral and dance groups.

An aerial view of Pocono Raceway 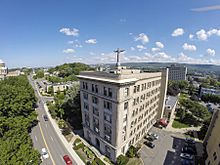 Many well-known universities are located in northeastern Pennsylvania. Penn State operates campuses in the Wilkes-Barre area, near Scranton and in Hazleton. Colleges in the Scranton area include Marywood University in Dunmore, Lackawanna College in downtown Scranton, and the University of Scranton, in downtown Scranton. Geisinger Commonwealth School of Medicine is the region's only medical school and specifically recruits students from NEPA and surrounding counties.

Four Catholic high schools are located in northeastern Pennsylvania. They include Holy Cross High School in Dunmore, which primarily serves Lackawanna County, Luzerne County, Wayne County, Pike County, Susquehanna County, Wyoming County, and Monroe County. The second school is Holy Redeemer High School in Wilkes-Barre, which serves primarily Luzerne County and Wyoming County. The third school is Notre Dame High School, which is located in Stroudsburg. It primarily serves Monroe County. The fourth school is Our Lady of Lourdes Regional School, which is located near the city of Shamokin.

All content from Kiddle encyclopedia articles (including the article images and facts) can be freely used under Attribution-ShareAlike license, unless stated otherwise. Cite this article:
Northeastern Pennsylvania Facts for Kids. Kiddle Encyclopedia.