Mount Pocono is a borough in Monroe County, Pennsylvania, in the United States. It is located nearly centered in the southernmost county of five in the northeast corner that are part of the Poconos Mountains region of the state. The borough serves as a local highway nexus, and sees a lot of tourist traffic making use of resources in the region.

According to the United States Census Bureau, the borough has a total area of 3.5 square miles (9.0 km2), all of it land.

The school’s mascot is a panther and their colors are blue and gray. They chose their mascot because the vast woodlands and wetlands which surround the school were once home to panthers. In the gym there is a huge panther in the middle of the floor. Clear Run also had a huge panther teddy bear that was passed around from classmate to classmate based on good behavior. Students with the panther were allowed special privileges to carry around the bear everywhere that day and to sit on the stage part of the cafeteria, with four friends.

The schools colors were chosen to resemble the colors of the common panther. The school has over 800 students that attend grades k through 2 for "Pocono Mountain School District is the largest, most diverse school district in northeast Pennsylvania".

Clear Run is an environmental school where the teachers take care of the students’ lives. On an everyday basis students and teachers create bonds where help is never far. The school is also very multi-cultural. As the schools says "All of the backgrounds and experiences that the students bring to our school make us a "melting pot." Clear Run for many years has had successful outcomes and statistics show that students that first enroll in Pocono Mountain Distinct usually graduate from it. 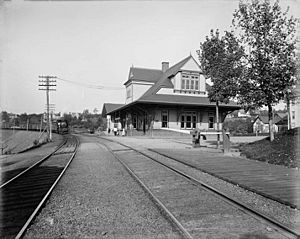 The main line of the Delaware, Lackawanna & Western Railroad passed through the southern end of the borough, providing access from New York City via the terminal at Jersey City, New Jersey. A passenger station was built at the crossing of Pennsylvania Route 611 in 1886. Most of the station was demolished in 1937 when the highway was widened. Regular passenger service to the borough ended in 1965. The D., L. & W. tracks now carry freight trains and an occasional excursion train from Steamtown National Historic Site.

Early 19th-century settlers used the area for lumbering. The "New Mount Pocono" post office was established in 1848. The town's name was changed in 1864 to "Forks", because of its five-way intersection where Pennsylvania Route 611 and Pennsylvania Route 940 cross and Pennsylvania Route 196 begins. The name was changed again in 1886 to "Mount Pocono". The Delaware, Lackawanna & Western Railroad provided transportation from New York City and Philadelphia. Mount Pocono quickly developed as a summer resort, advertising clean mountain air, spring water, luxury hotels and excellent fishing. The boom times lasted into the mid-20th century. Most of the resort hotels burned or closed, and passenger service to the town ended in 1965.

Mount Airy Lodge grew into an 895-room mega-resort. In the mid- and late-20th century it was a popular honeymoon destination, famous for its heart-shaped bathtubs. It closed in 2001, and was demolished. Casino gambling in Pennsylvania became legal in 2004. Mount Airy Casino Resort was built on the Mount Airy Lodge's lakeside site, and opened in 2007.

Currently, Mount Pocono serves as the commercial center for the northern part of Monroe County. Stores from national and regional chains such as Lowe's, Walmart, Weis Markets, and others are in the Borough. Local businesses include the Casino Theatre, the Village Trader, and Grandpa Pete's Bagels. Many businesses are members of the Mount Pocono Association (formerly, the Mount Pocono Business Association).

All content from Kiddle encyclopedia articles (including the article images and facts) can be freely used under Attribution-ShareAlike license, unless stated otherwise. Cite this article:
Mount Pocono, Pennsylvania Facts for Kids. Kiddle Encyclopedia.