Tobyhanna is an unincorporated community in Coolbaugh Township in Monroe County, Pennsylvania, United States. Despite its name, it is not located in Tobyhanna Township.

"Tobyahanna" is derived from an American Indian word meaning Toby-"Dark Water"Hanna-"a stream whose banks are fringed with alder."

From about 1900 to 1936, Tobyhanna lakes were the site of active ice industries. The ice was cut from the lakes during the winter and stored in large barn-like structures. During the rest of the year, the ice was added to railroad boxcars hauling fresh produce and meats destined for East Coast cities.

In 1912, Tobyhanna had a railway station, telegraph, and post office. The federal government acquired land within Tobyhanna that became the Tobyhanna Military Reservation, later Tobyhanna Army Depot, which was used as an Artillery training ground. Edward B. Reed, in The Field Artillery Journal (January–March 1917), described Tobyhanna based on his experiences with the Yale Batteries during their training:

"The camp at Tobyhanna is on a rocky, treeless crest from which no trace of man is visible. About are mountains and uncultivated valleys. The village of Tobyhanna is interesting only because it contains a station that enables you to leave it. No better place for work could be found."

In recent years, due to its location between the New York and Philadelphia metropolitan areas and development of new homes, many families have moved to the Poconos. Some Tobyhanna residents choose to commute to the city via Interstate 380, Interstate 80, or Interstate 84. 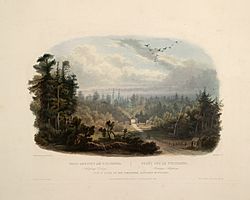 Forest scene on the Tobihanna, Alleghany Mountains (circa 1832): aquatint by Karl Bodmer from the book "Maximilian, Prince of Wied’s Travels in the Interior of North America, during the years 1832–1834"

The landscape of the area is of broad, flat areas intermixed with low hills covered with a northern hardwood forest. Common tree species are beech, birch, and maple.

All content from Kiddle encyclopedia articles (including the article images and facts) can be freely used under Attribution-ShareAlike license, unless stated otherwise. Cite this article:
Tobyhanna, Pennsylvania Facts for Kids. Kiddle Encyclopedia.