Kids Encyclopedia Facts
This page is about the tree. For the computer program, see Maple (CAS).

Maple (Latin name Acer) is a genus of trees or shrubs. Sometimes they are made a family of their own, the Aceraceae. At other times they are included in the Sapindaceae. To include them in the Sapindaceae is the more modern classification. There are between 100 and 200 species of Maples. Most species are native to Asia, but some also occur in Europe, Northern Africa, and North America.

The word Acer comes from a Latin word meaning "sharp". It was given because of the characteristic sharp points on the maple leaves. The first person to talk about the genus that way was French botanist Joseph Pitton de Tournefort in 1700. The type species of the genus is Acer pseudoplatanus (Sycamore Maple).

The maple's distinctive fruit are called samaras, and known by many children as "helicopters" by the way they spin as they fall. Inside the fruit are found their seeds, which are in pairs. Each one is enclosed in a "nutlet" attached to a flattened wing of papery tissue. They are shaped to spin as they fall and carry the seeds a considerable distance on the wind. One tree can release hundreds of thousands of seeds at a time. Some seeds can remain in the soil for several years before germinating.

What are maples used for? 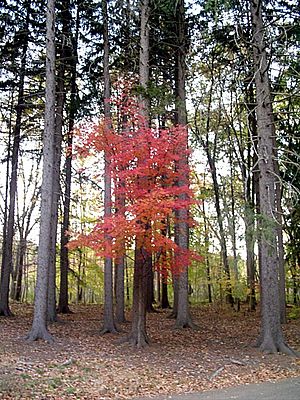 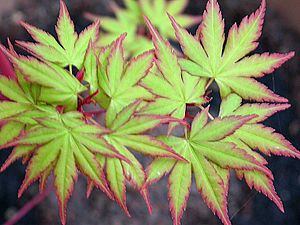 Some species of maple are extensively planted as ornamental trees by homeowners, businesses and municipalities due to their fall colour, relatively fast growth, ease of transplanting, and lack of hard seeds that would pose a problem for mowing lawns. Particularly popular are Norway maple (although it is considered invasive in North America), silver maple, Japanese maple, and red maple. Other maples, especially smaller or more unusual species, are popular as specimen trees.

Numerous maple cultivars that have been selected for particular characteristics can be propagated only by asexual reproduction such as cuttings, tissue culture, budding or grafting. Acer palmatum (Japanese maple) alone has over 1,000 cultivars, most selected in Japan, and many of them no longer propagated or not in cultivation in the Western world. Some delicate cultivars are usually grown in pots and rarely reach heights of more than 50–100 cm. 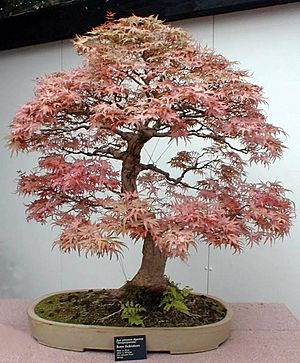 Maples are a popular choice for the art of bonsai. Japanese maple (Acer palmatum), trident maple (A. buergerianum), Amur maple (A. ginnala), field maple (A. campestre) and Montpellier maple (A. monspessulanum) are popular choices and respond well to techniques that encourage leaf reduction and ramification, but most species can be used. 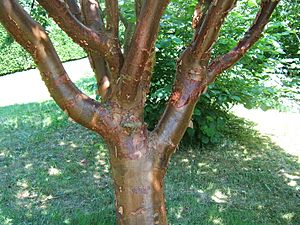 Acer griseum is widely grown for its decorative bark

Maple collections, sometimes called aceretums, occupy space in many gardens and arboreta around the world including the "five great W's" in England: Wakehurst Place Garden, Westonbirt Arboretum, Windsor Great Park, Winkworth Arboretum and Wisley Garden. In the United States, the aceretum at the Harvard-owned Arnold Arboretum in Boston is especially notable. In the number of species and cultivars, the Esveld Aceretum in Boskoop, Netherlands is the largest in the world.

Many maples have bright autumn foliage, and many countries have leaf-watching traditions. In Japan, the custom of viewing the changing colour of maples in the autumn is called "momijigari". Nikko and Kyoto are particularly favoured destinations for this activity. In addition, in Korea, the same viewing activity is called "Danpung-Nori" and the Seoraksan and Naejang-san mountains are very famous places for it.

The Acer saccharum (sugar maple) are a contributor to seasonal fall tourism in North America, particularly in Central Ontario, Québec, and the northern tier of the United States including Wisconsin, Michigan, Vermont, New York, New Hampshire, Maine, and Western Massachusetts.

Maples are important as source of syrup and wood. Dried wood is often used for the smoking of food. Charcoal from maples is an integral part of the Lincoln County Process used to make Tennessee whiskey. They are also cultivated as ornamental plants and have benefits for tourism and agriculture.

The sugar maple (A. saccharum) is tapped for sap, which is then boiled to produce maple syrup or made into maple sugar or maple taffy. It takes about 40 litres (42 US qt) of sugar maple sap to make 1 litre (1.1 US qt) of syrup. While any Acer species may be tapped for syrup, many do not have sufficient quantities of sugar to be commercially useful. 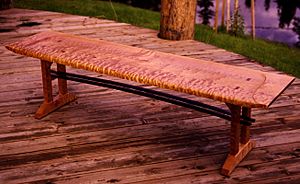 A bench made of highly figured maple wood

Some of the larger maple species have valuable timber, particularly Sugar maple in North America, and Sycamore maple in Europe. Sugar maple wood—often known as "hard maple"—is the wood of choice for bowling pins, bowling alley lanes, pool cue shafts, and butcher's blocks. Maple wood is also used for the manufacture of wooden baseball bats, though less often than ash or hickory due to the tendency of maple bats to shatter if they do break. The maple bat was introduced to Major League Baseball (MLB) in 1998 by Sam Bat founder Sam Holman. Today it is the standard maple bat most in use by professional baseball. Maple is also commonly used in archery as the core material in the limbs of a recurve bow due to its stiffness and strength.

Maple wood is often graded based on physical and aesthetic characteristics. The most common terminology includes the grading scale from common #2; which is unselected and often used for craft woods; common #1, used for commercial and residential buildings; clear; and select grade, which is sought for fine woodworking.

Some maple wood has a highly decorative wood grain, known as flame maple, quilt maple, birdseye maple and burl wood. This condition occurs randomly in individual trees of several species, and often cannot be detected until the wood has been sawn, though it is sometimes visible in the standing tree as a rippled pattern in the bark.

These select decorative wood pieces also have subcategories that further filter the aesthetic looks. Crotch Wood, Bees Wing, Cats Paw, Old Growth and Mottled are some terms used to describe the look of these decorative woods.

Maples have a long history of use for furniture production in the United States. 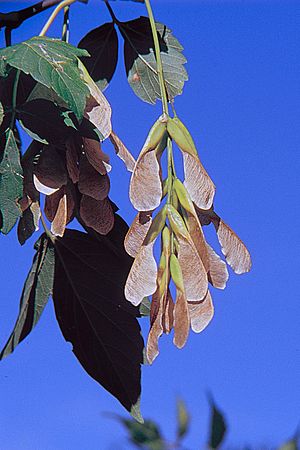 Maple is considered a tonewood, or a wood that carries sound waves well, and is used in numerous musical instruments. Maple is harder and has a brighter sound than mahogany, which is another major tonewood used in instrument manufacture.

The back, sides, and neck of most violins, violas, cellos, and double basses are made from maple.

Electric guitar necks are commonly made from maple, having good dimensional stability. The necks of the Fender Stratocaster and Telecaster were originally an entirely maple one piece neck, but later were also available with rosewood fingerboards. Les Paul desired an all maple guitar, but due to the weight of maple, only the tops of Gibson's Les Paul guitars are made from carved maple, often using quilted or flamed maple tops. Due to its weight, very few solid body guitars are made entirely from maple, but many guitars have maple necks, tops or veneers.

Maple is also often used to make bassoons and sometimes for other woodwind instruments like maple recorders.

Many drums are made from maple. From the 70s to the 90s, maple drum kits were a vast majority of all drum kits made, but in recent years, birch has become popular for drums once again. Some of the best drum-building companies use maple extensively throughout their mid-pro range. Maple drums are favored for their bright resonant sound. Certain types of drum sticks are also made from maple.

As they are a major source of pollen in early spring before many other plants have flowered, maples are important to the survival of honeybees that play a commercially important role later in the spring and summer. 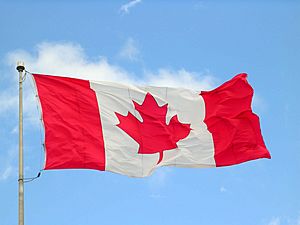 The flag of Canada shows a maple leaf.

All content from Kiddle encyclopedia articles (including the article images and facts) can be freely used under Attribution-ShareAlike license, unless stated otherwise. Cite this article:
Maple Facts for Kids. Kiddle Encyclopedia.