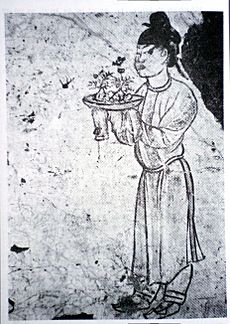 Chinese drawing of something like bonsai, early 8th century

Bonsai (盆栽code: ja is deprecated , lit. plantings in tray, from bon, a tray or low-sided pot and sai, a planting or plantings) is the Japanese art of growing small trees in pots. This is done by growing the tree in a small pot or tray and pruning (cutting) the branches and roots to keep the tree small over time. Bonsai trees are trained to grow into a shape that is pleasing to look at. The best bonsai trees appear to be old, and to have a shape that seems like a real tree except much smaller.

The word bonsai means "tree in tray" in the Japanese language. Bonsai is a very old art form in Japan. It is a Japanese form of the older Chinese art called penjing. Penjing is a Chinese art form that also uses trees growing in pots. Other nations also have arts like bonsai and penjing.

A bonsai starts with a small tree. This tree can be grown from a seed, or can be found already growing in a yard or a park or the forest. It can also be bought from a plant store.

To make the bonsai, the small tree is taken out of the ground. Its roots are carefully cleaned of dirt. The roots may be trimmed (cut) a little to help them fit in a small pot. The branches may also be trimmed to make the tree smaller. Then it is put in a bonsai pot, which has low sides. Fresh soil (dirt) is put in the pot to cover the bonsai tree's roots. Then it is watered and put outdoors to live.

Good trees to make into bonsai have small leaves (pine tree needles are leaves too). If the leaves are too big, the bonsai will not look like a small tree. A good bonsai tree will have old-looking bark and old-looking roots too.

The art of bonsai began in Japan over one thousand years ago. It was brought to Japan from China around the year 800 A.D. At first, bonsai were planted in large pots like the Chinese used. But the Japanese later put them in very low, almost flat pots. This change made the tree itself the most important thing in the art form, not the fancy pot or small houses or statues of people which other nations used with their small trees in pots.

At first only the rich and noble people of Japan had bonsai. One family could have many bonsai, which would grow in pots in the garden outside of the house. A servant might take care of all the bonsai and would learn a lot about how to grow bonsai. The rules about how to grow a bonsai properly were not well known and were not shared with other people. Later more people began to grow bonsai. Some were holy people, like monks. Some were Japanese families who were not noble or really rich, but who had enough money and time to grow one or two bonsai in their gardens or house yards. This larger group of people began to share what they learned about the rules of bonsai and so more people could join in growing bonsai. By the twentieth (20th) century, the rules of bonsai were very well known in Japan and many people could afford to grow their own bonsai.

A tree that could be used for bonsai is not small in nature. If left to grow in the open soil, a bonsai tree would grow as big as any other tree. But in a pot, the tree will not grow very big. To help keep it small, the owner of the bonsai trims (cuts) its leaves and branches every year. Every two or three years, the bonsai owner lifts the bonsai out of its pot and trims the roots. Then the owner puts the bonsai back in its pot with some new soil.

A bonsai grower checks the soil of every bonsai pot once every day. If the soil is nearly dry, the grower waters it until it is wet from the top of the soil to the bottom of the pot. Every few weeks the grower adds a little fertilizer to each bonsai tree's soil. In the winter this happens less often.

A bonsai can live to be older than a large tree of the same species if it is grown with care. A bonsai needs good care, and a bonsai with poor care will not be healthy and might die. To keep a bonsai strong, it must grow outdoors like a real tree. It must never get too dry or stay too wet. It must never get too hot or too cold. If it gets a plant sickness like a fungus, it must be cured quickly. If it gets bugs like aphids the bugs must be cleaned off or killed quickly.

In the art of bonsai a sense of beauty, patience, and good care are all needed. The plant, the shape of the plant, as well as the arrangement of soil and the kind of pot used are important.

Each bonsai has a shape, partly the shape and direction of the trunk and partly the shape of the whole tree with its branches and leaves. The most common shapes are known as "styles", including

The upright style has a straight trunk that points up. Its branches are big at the bottom and small at the top.

The informal style has curves in the trunk. Its branches are also larger at the bottom and smaller at the top.

The slanted-style bonsai trunk does not point straight up like the upright style. The trunk comes out of the soil at an angle and points to the left or right.

The cascade-style bonsai look like trees that grow out over water or on the sides of mountains. The tip of the tree is low, and may even fall below the base of the pot.

The broom style has a trunk that is straight and upright. Branches stick out in all directions from about 1/3 of the way up the trunk.

The forest style (寄せ植えcode: ja is deprecated , Yose-ue) or "group planting" has several trees in one pot or on a flat slab of rock.

There are many other known styles for Japanese bonsai. When bonsai are shown to the public, or when they appear in a catalog to be sold to people, the style that best matches the bonsai will often be put in the tree's description. This allows the person looking at the bonsai to understand the plan or goal of the person who made the bonsai.

All content from Kiddle encyclopedia articles (including the article images and facts) can be freely used under Attribution-ShareAlike license, unless stated otherwise. Cite this article:
Bonsai Facts for Kids. Kiddle Encyclopedia.