Scholars rocks can be any color. There are a wide variety of sizes. Scholars rocks can weigh hundreds of pounds or less than one pound. The term also means stones which are placed in traditional Chinese gardens.

Four important qualities for the rocks were recognized in the Tang dynasty. They are: thinness (shou), openness (tou), perforations (lou), and wrinkling (zhou).

Chinese scholar's rocks influenced the development of suseok in Korea and suiseki in Japan.

The origin of the stone is a notable feature. 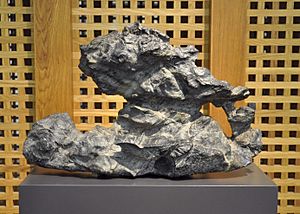 The evaluation of a scholar's rock identifies subtlety of color, shape, markings and surface. The qualities which are prized include

The stone may be displayed on a wooden base that has been carved specifically for the stone. The stones are a traditional subject of Chinese paintings.

All content from Kiddle encyclopedia articles (including the article images and facts) can be freely used under Attribution-ShareAlike license, unless stated otherwise. Cite this article:
Chinese scholar's rocks Facts for Kids. Kiddle Encyclopedia.