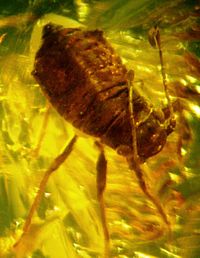 Aphids are small bugs which feed on plants. Aphids cause more plant damage than any other insects. There are about 4,000 different species of aphid.

About 250 species are serious pests for agriculture and forestry as well as an annoyance for gardeners. They vary in size from 1-10 mm long.

Aphids are found many places on earth. Aphids are most common in temperate zones. Aphids can travel far in the air. For example, the lettuce aphid spread from New Zealand to Tasmania. They have also been spread by human transportation of infested plant materials. 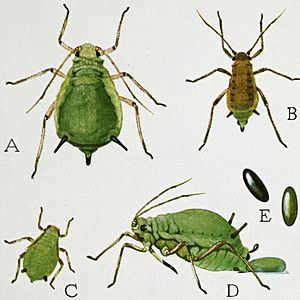 The life stages of the green apple aphid (Aphis pomi)

Most aphids have soft bodies, which may be green, black, brown, pink or almost colourless. Aphids have antennae with as many as six segments. Aphids feed themselves through sucking mouthparts called stylets, enclosed in a sheath called a rostrum, which is formed from modifications of the mandible and maxilla of the insect mouthparts. They have long, thin legs and two-jointed, two-clawed tarsi.

Most aphids have a pair of cornicles (or "siphunculi"), abdominal tubes through which they exude droplets of a quick-hardening defensive fluid containing triacylglycerols, called cornicle wax. Other defensive compounds can also be produced by some types of aphids.

Aphids have a tail-like protrustion called a "cauda" above their rectal apertures. They have two compound eyes, and an ocular tubercle behind and above each eye, made up of three lenses (called triommatidia).

When host plant quality becomes poor or conditions become crowded, some aphid species produce winged offspring, "alates", that can disperse to other food sources. The mouthparts or eyes are smaller or missing in some species and forms.

Many aphid species are monophagous (that is, they feed on only one plant species). Others, like the green peach aphid Myzus persicae, feed on hundreds of plant species across many families.

Aphids passively feed on sap of phloem vessels in plants, as do many of their fellow members of Hemiptera such as scale insects and cicadas. Once a phloem vessel is punctured, the sap, which is under high pressure, is forced into the aphid's food canal.

Plant sap is an unbalanced diet for aphids as it lacks essential amino acids, which aphids, like all animals, cannot synthesise, and possesses a high osmotic pressure due to its high sucrose concentration. Essential amino acids are provided to aphids by bacterial endosymbionts, harboured in special cells, bacteriocytes. These symbionts recycle glutamate, a metabolic waste of their host, into essential amino acids.

As they feed, aphids often transmit plant viruses to the plants, such as to potatoes, cereals, sugarbeets and citrus plants. These viruses can sometimes kill the plants.

All content from Kiddle encyclopedia articles (including the article images and facts) can be freely used under Attribution-ShareAlike license, unless stated otherwise. Cite this article:
Aphid Facts for Kids. Kiddle Encyclopedia.