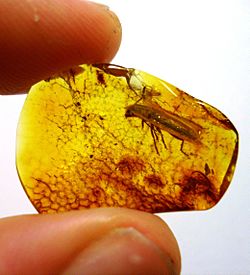 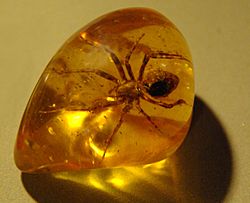 A spider trapped in amber

Amber is the common name for fossil resin. It occurs in different colors and has been much valued from antiquity to the present as a gemstone. Amber is made into a variety of decorative objects such as jewelry. It has also been used as a healing agent in folk medicine. Although not mineralized, amber is sometimes considered as a gemstone.

Most of the world's amber is in the range of 30–90 million years old. Semi-fossilized resin or sub-fossil amber is called copal. Baltic amber was called 'Freya's tears' by the Norse and the 'tears of the Heliades' by the ancient Greeks.

Amber consists of several resinous bodies that can mostly dissolve in alcohol, ether and chloroform, associated with a bituminous substance that does not dissolve. There are five classes of amber, defined on the basis of their chemical constituents. Because it originates as a soft, sticky tree resin, amber sometimes contains animal and plant material. 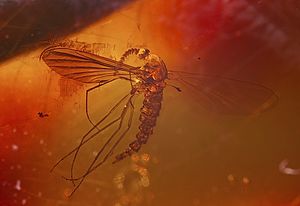 A mosquito in amber

The name comes from the Arabic. True amber has sometimes been called kahroba, a word of the Persian language meaning, "that which attracts straw", for the power which amber possesses of acquiring an electric charge by friction.

Amber was mentioned by Homer, Aristotle, Plato and others. Tacitus in his Germania talks about the Aesti people as the only ones to gather amber from the Baltic Sea. 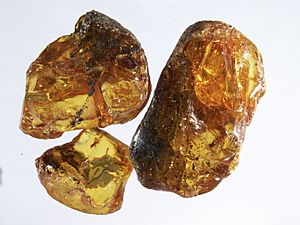 There is also strong evidence for the theory that the Baltic coasts during the advanced civilization of the Nordic Bronze Age was the source of most amber in Europe, for example the amber jewelry found in graves from Mycenaean Greece has been found to originate from the Baltic Sea.

During the fourteenth century, the Teutonic Knights controlled the production of amber in Europe, forbidding its unauthorised collection from beaches on the Baltic coastline under their jurisdiction, and punishing breakers of this ordinance with death. 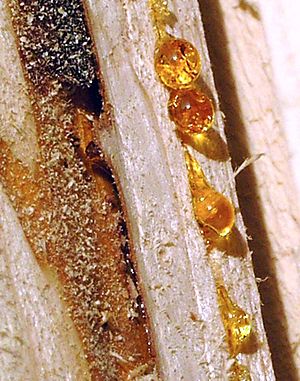 Amber is formed from sap coming out of certain trees. The sap soon becomes a sticky gum, and fossilizes as amber. The amber can look different depending on its origin, and its later geological history.

To end up as amber, the starting resin must resist decay. Many trees produce resin, but usually it is broken down by physical and biological process. Exposure to weather tends to disintegrate resin, assisted by microorganisms such as bacteria and fungi. For resin to survive long enough to become amber, it must resist such forces, or be produced under conditions that exclude them.

Baltic amber (historically called Prussian amber) is found as irregular nodules in a marine sand, known as blue earth, in the Lower Oligocene strata of Sambia in Kaliningrad Oblast, where it is now systematically mined.

Agathis amber comes from the conifer Agathis, a tree that used to grow over a much wider area. Amber from America and Africa often comes from the Hymenaea, a genus of flowering plants. 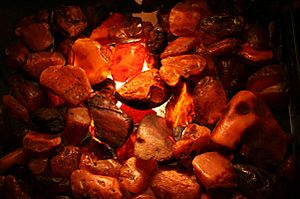 The resin can contain, in addition to the beautifully preserved plant-structures, remains of insects, spiders, annelids, frogs, crustaceans and other small organisms that became trapped while it was fluid. In most cases the organic structure has disappeared, leaving only a cavity, with perhaps a trace of chitin.

Amber is found along the shores of a large part of the Baltic Sea and the North Sea. The greatest amber-producing country is the promontory of Sambia, now part of Russia's Kaliningrad Oblast. About 90% of the world's extractable amber is in the Kaliningrad region of Russia on the Baltic Sea.

Amber was deposited in the late Eocene and early Oligocene in a delta of a prehistoric river, in a shallow part of a marine basin. In addition to the coast near Kaliningrad, amber is also found elsewhere in the Baltic Sea region. 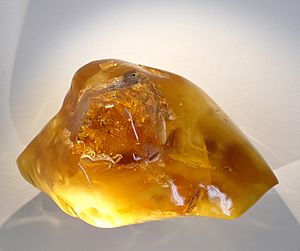 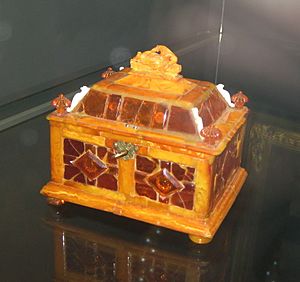 Small amounts of Baltic amber can even be found outside the Baltic region, for example on the coastline of the south east of England.

Amber is extensively used for beads and other ornaments, and for cigar-holders and the mouth-pieces of pipes. The Amber Room in the Catherine Palace near Saint Petersburg is notable. It is a reproduction of the original Amber Room, destroyed in WWII.

Amber has been used as jewelry since the Stone Age, from 13,000 years ago. Amber ornaments have been found in Mycenaean tombs and elsewhere across Europe. To this day it is used in the manufacture of smoking and glassblowing mouthpieces. Amber's place in culture and tradition lends it a tourism value; Palanga Amber Museum is dedicated to the fossilized resin.

Amber has long been used in folk medicine for its purported healing properties. Amber and extracts were used from the time of Hippocrates in ancient Greece for a wide variety of treatments through the Middle Ages and up until the early twentieth century. In ancient China, it was customary to burn amber during large festivities.

All content from Kiddle encyclopedia articles (including the article images and facts) can be freely used under Attribution-ShareAlike license, unless stated otherwise. Cite this article:
Amber Facts for Kids. Kiddle Encyclopedia.